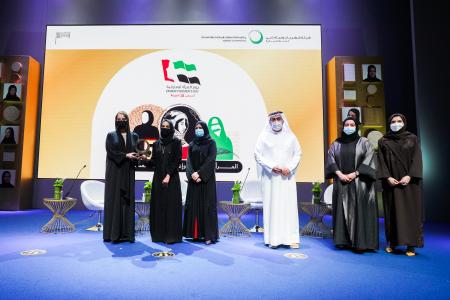 DEWA held the forum at its DEWA Campus for Occupational and Academic Development, following all precautionary measures in the UAE to limit the spread of COVID-19. A live broadcast of the forum was shared on DEWA’s social media, among female employees and women’s committees across Dubai government.

“I am pleased to join you today in celebrating Emirati Women’s Day 2021 under the theme ‘Women: Ambitions & Inspiration for Next 50 Years.’ This event highlights the successful journey of women empowerment in the UAE, instilled by the late Founding Father Sheikh Zayed bin Sultan Al Nahyan, may his soul rest in peace, and supported by the vision of His Highness Sheikh Khalifa bin Zayed Al Nahyan, President of the UAE; His Highness Sheikh Mohammed bin Rashid Al Maktoum, Vice President and Prime Minister of the UAE and Ruler of Dubai; and Her Highness Sheikha Fatima bint Mubarak, Chairwoman of the General Women’s Union, Supreme Chairwoman of the Family Development Foundation, and President of the Supreme Council for Motherhood and Childhood (Mother of the Nation), to strengthen women’s position and enhance their pivotal role as effective partners in the development process,” said Al Tayer in his keynote speech.

“Our celebration of Emirati Women’s Day this year is especially important on the Year of the Fiftieth, where we celebrate 50 years of the fastest and most noble journey in building the country and its people. This year, we increase our efforts to prepare for the upcoming 50 years of prosperity and benevolence, especially with the preparations to host the best version of Expo 2020 Dubai. On this occasion, I would like to congratulate Emirati women who proved their competence during the challenging year of 2020 in achieving the wise leadership’s vision to turn challenges into opportunities. They played a significant role in curbing the COVID-19 pandemic and accelerating its recovery process. They are the main pillars of outstanding milestones achieved by the UAE over the past year, including their formation of 18% of workers in the space sector and 34% of the Hope Probe team, which is considered one of the highest percentages worldwide. Women also play a leading role on the frontline against the COVID-19 pandemic, as they form 64% of doctors, nurses, and technicians in the country’s health sector,” added Al Tayer.

“DEWA female employees record daily achievements that guide our global excellence and leadership journey. They spare no effort in serving the nation in all fields. This exemplifies the role of Emirati women as role models in building a cohesive society capable of adjusting to change. DEWA provides a positive and motivating work environment to empower and support women in their pioneering role of serving society and bringing up future generations. We harness all resources to help them balance their professional and social lives, unleash their talents and contribute to making a positive and sustainable impact. The number of female employees has reached 1,943 employees across our divisions. This includes 720 women in the engineering and technical sectors and 311 employees in managerial positions. Emirati women form 81.5% of the total female workforce at DEWA. 34.2% of the R&D Centre’s staff are Emirati women who are highly educated in science and engineering areas. Our female employees participate in several volunteering activities. The total number of volunteering hours in 2020 was more than 13,300 hours in 40 social and humanitarian initiatives. Female employees at DEWA contribute effectively to conservation and social awareness programmes, especially those that target women. We provide opportunities for both genders in managerial and technical positions and women’s empowerment, making DEWA role models in the public and private sector locally and internationally; with DEWA being key government supporters to women in the energy sector. In conclusion, I would like to praise Emirati women’s efforts and their impactful contributions that make our country the best and the strongest. God bless your work and efforts. Happy Emirati Women’s Day,” said Al Tayer.

Her Excellency Sara Mohammad Falaknaz, Federal National Council Member, emphasised that the UAE’s wise leadership paid remarkable attention to women; supporting and empowering them in all areas, as well as helping them build confidence in their ability to achieve success and excellence across all areas of work. Her Excellency noted that our beloved country has numerous examples of women who have raised its flag fluttering high regionally and globally. Emirati women represent their country in various international forums across all sectors. Her Excellency commended the endeavours of the exceptional leadership in developing the capabilities and skills of Emirati women to be ready to play their role in shaping our future. The UAE has invested in the success women have achieved over the past five decades to play a more efficient and influential role in achieving the UAE’s strategy for the next fifty years.

“Those who know our region closely are aware of the inaccuracy of the prevailing perception among some, especially in western countries, about Arab women, especially with regard to their role in public life. Throughout the ages, Arab women have had a very strong presence in all areas of life,” said Dr. Hessa Lootah, Media Professor and first Emirati female television director.

Dr Lootah emphasised that Her Highness Sheikha Fatima bint Mubarak, Mother of the Nation, has supported and empowered Emirati women’s success in all areas of society.

“On Emirati Women’s Day, we say, may the soul of the Founding Father the late Sheikh Zayed bin Sultan Al Nahyan rest in peace. Since the first day of the Union, he ensured that Emirati women become key partners of the country’s growth, development, and prosperity. On this day, we can only express our highest thanks and gratitude to our wise leadership for their generous care for women and for their sound guidance, which paved the way for Emirati women to occupy the highest positions. Emirati women have become global role models with their achievements across all areas. We also extend our thanks and gratitude to Her Highness Sheikha Fatima bint Mubarak, Chairwoman of the General Women’s Union, Supreme Chairwoman of the Family Development Foundation, and President of the Supreme Council for Motherhood and Childhood (Mother of the Nation) for her unlimited support to women. On this day, we proudly say that Emirati women have proven their success in all fields, including the health sector, the most vibrant and competitive in the world. We see this already in Dubai Health Authority, which has many distinguished Emirati women across all positions and jobs. In 2020, the percentage of Emirati women in leadership positions in the health sector was 63.2%, and Emirati female doctors were 6% of the total licensed doctors in the UAE. However, the percentage of Emirati women in the nursing sector does not exceed 2%, which requires more initiatives to support Emirati women in this vital sector. The percentage of Emirati women is higher in some medical specialities, such as family medicine, where it reached 32%, psychiatry, which is 15%, and community medicine, which is 90%. We are happy and proud that Allah has blessed us to be Emirati women,” said Dr Manal Taryam, CEO of Primary Healthcare Services Sector at Dubai Health Authority.

“On behalf of DEWA’s female employees, I would like to express my gratitude to the top management of DEWA, which provides all necessary support to our female employees. It provides all capabilities to enhance the Emirati women’s position as a key and effective partner in society, supporting DEWA Women’s Committee to excel in their work, and helping female employees to keep pace with changes.  This maintains their position as a role model of effective national work and a key partner for sustainable development,” said Fatima Al Jokar, Chairperson of DEWA Women’s Committee.

The second panel discussion highlighted DEWA’s role in women empowerment under the title ‘DEWA’s support to women: Bright experience for sustainable development.’ Many female employees at DEWA participated in the panel, speaking about their role in consolidating the values of giving back to the nation, highlighting their efforts to advance government work. The forum included success stories by DEWA’s female employees working in clean and renewable energy, and their substantial role in this vital and futuristic field.

Like previous editions of the forum, DEWA honoured several female Emirati staff who have contributed effectively to DEWA’s excellence and global leadership. A video showcased the journey of Emirati women at DEWA and in the UAE over the past 50 years. During the Forum, DEWA organised an interactive exhibition with Emirati cultural activities.

6 Reasons Why Entrepreneurs Need To Start a Blog

How to Choose the Right Type of Networking