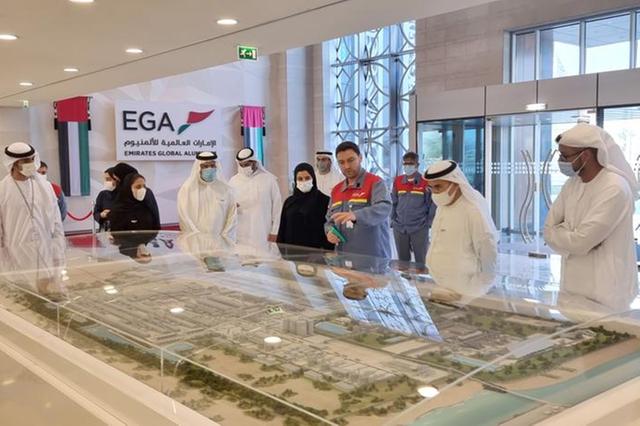 Industrial innovation is a key priority to achieve Operation 300bn, the UAE’s strategy to grow the industrial sector’s contribution to the national economy. The Ministry of Industry & Advanced Technology is aiming to spur the development and adoption of Industry 4.0 and other advanced technologies to generate significant economic returns, reduce the environmental footprint of the industrial sector, and boost its competitiveness.

EGA is one of the UAE’s most innovative companies and has developed its own aluminium smelting technology in the UAE for more than 25 years. EGA’s latest technology, DX+ Ultra, is amongst the most efficient in the global aluminium industry. The company has used its own technology in all its smelter expansions since the 1990s and has retrofitted all its older production lines.

In 2016, EGA became the first UAE industrial company to license its core process technology internationally through a deal with Aluminium Bahrain, in a milestone in the development of a knowledge economy in the country. The Minister was briefed on how EGA’s technologists and engineers collectively spent more than 6,200 work-days in Bahrain supporting Aluminium Bahrain to implement EGA’s DX+ Ultra technology on its project.

EGA is in discussions with companies from Colombia to Indonesia on further potential technology and technological know-how transfers from the UAE.

For the decades ahead, EGA’s aim is to be a technology pathfinder for the global aluminium industry including in the adoption of Industry 4.0, expand the company’s position as technology supplier of choice, and establish a thriving manufacturing innovation ecosystem in the UAE.

Her Excellency Sarah Al Amiri stressed that, under the directives of the UAE leadership, the Ministry is fully focused on supporting the growth of national industries, stimulating innovation and facilitating the adoption of advanced technology in industrial systems and solutions. It also seeks to encourage and develop industries in which the country has a competitive advantage in order to attract investment. Heavy industries are considered a priority sector for the country, due to their high operational efficiencies and ability to enhance the competitiveness of Emirati products in global markets.

Her Excellency commended Emirates Global Aluminium for its support of the advanced industrial sector in the UAE, and its vital national role in enhancing productivity and industrial efficiency, its adoption of advanced technology, and its development of technical and knowledge capabilities. She also noted that the UAE offers unprecedented investment incentives and facilities to enable and stimulate the industrial sector, whether at the level of priority industries or industries of the future.

Abdulnasser Bin Kalban, Chief Executive Officer of EGA, said: “Innovation and continuous improvement have been foundations of EGA’s competitiveness for decades, and we have bold aspirations to lead the technological development of our industry for the decades ahead. We were honoured to brief Her Excellency Sarah Al Amiri on the work we do, and receive her guidance on how we can further contribute to the UAE’s industrial innovation to achieve the goals of Operation 300bn.”

The Minister visited EGA’s aluminium smelter at Al Taweelah, and was briefed on the latest technology developed and installed by the company producing high purity aluminium in one of the longest potlines in the world.

Her Excellency was also briefed by EGA scientists on the company’s research & development breakthroughs in the productive re-use of bauxite residue.

More than 150 million tonnes of bauxite residue is thought to be produced worldwide each year, with less than two per cent put to productive use. EGA’s new game-changing process converts bauxite residue in its entirety in hours into an environmentally-benign, plant-friendly soil. The scientists discussed with the Minister their portfolio of other novel applications for the by-product that are set to be publicly unveiled in the coming months.

EGA worked with academics from The University of Queensland’s School of Agriculture and Food Sciences on the bauxite residue project. The Minister heard how EGA scientists and technologists collaborate with both international and local universities to combine EGA’s industrial expertise with the latest academic thinking, as well as promote scientific research and encourage young scientists and engineers. Local universities EGA collaborates with include the American University of Sharjah, Khalifa University, and UAE University.