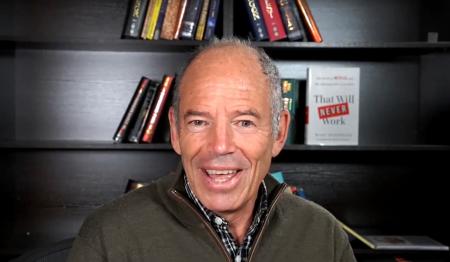 Shaping a post-pandemic future is bringing great opportunities for startups across the world and has created “the most exciting thing we have seen in a long, long time” for entrepreneurs, Marc Randolph, the co-founder and first CEO of Netflix, has told the latest edition of Qatar Foundation’s Education City Speaker Series.

In the virtual talk, titled Don’t Let Dreams Be Dreams: What to Do With an Idea and themed around innovation and entrepreneurship, coupled with sustainability, Randolph shared lessons from his journey at what is now the world’s largest streaming service with audiences, as he discussed ways to foster a startup culture and entrepreneurial mindsets.

Focusing on how to prepare startups for a post-pandemic world, Randolph said that “the worst thing for any entrepreneur is status quo” – meaning taking for granted that if something worked in the past, it will continue to work in the future.

“Before COVID-19, we had a world where very, very large companies operated in an incredibly predictable and dependable way,” he explained. “They could see their sales and revenue for 8-12 quarters into the future. Then along comes a world where, all of a sudden, everything is changing.

“We all know that, eventually, things will go back to normal, but nobody knows what that normal will look like. There has been an incredible acceleration of e-commerce and mobile medicine, but what’s going to happen in 12 months’ time? Nobody knows whether it will stay the same or go back, and that is the most wonderful circumstance for entrepreneurs who have trained themselves not to predict the future, but to be ready for whatever the future happens to bring them.

“Entering into a world with tremendous uncertainty is, in my opinion, the most exciting thing we have seen in a long, long time for entrepreneurship. Everything is now up for grabs, everything is going to be done differently, and the people prepared to take advantage of that are the people who have an entrepreneurial mindset. And I think the change we will see will be driven by new business formation.”

During the talk, moderated by user experience and design consultant Agata Braja, Randolph recounted his journey at Netflix – of how the idea for it emerged, and what it took to become the streaming service that it is today – saying: “The idea of Netflix came over a long period of time. [Netflix co-founder] Reed Hastings and I brainstormed hundreds of ideas before settling into an idea of a DVD rental service.”

But that didn’t come easily. Randolph says when he pitched this DVD-by-rental idea to people – his friends, his employees, even his mother – nobody believed in it. “People seem to think Netflix was one great idea that came into existence instantly, but that wasn’t the case. We were working on this idea of turning into a streaming service for nine years.”

During his talk, Randolph spoke about what makes successful entrepreneurs, highlighting that they “do more and think less – when an idea pops into their head, they don’t think of whether it’s good or bad, these people quickly execute it.”

“In a startup, there are hundreds of things that are broken and dozens of things that need your attention, and a classic mistake is that an entrepreneur wants to do everything,” he added. “That results in one-third of it getting done. You have to focus – to have the ability to dedicate 110 percent of your time to a very small subset of items at the exclusion of everything else.”