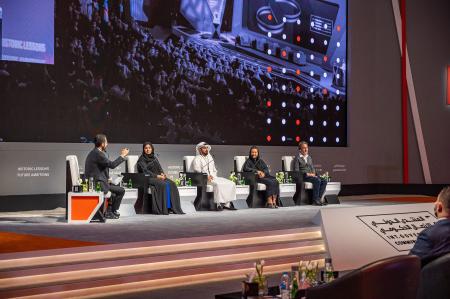 The 10th edition of the International Government Communication Forum (IGCF), organised by the Sharjah Government Media Bureau (SGMB) at Expo Centre Sharjah, hosted a panel discussion titled ‘Nature of storytelling and function in discourse’ on Sunday, September 26, to highlight the effectiveness of storytelling in successfully translating government discourses to communities.

Storytelling as a channel for government communications

Highlighting credibility as the most important factor in government messaging, the panel discussed the other aspects that make for good storytelling. “It should have a human element that delves into the heart and gets instilled in people’s minds. Credibility, empathy and the impact it has on the target audience are the key factors here,” said Al Menhali.

Al Falahi offered a short story to illustrate what makes for good strategies in government communication. His example highlighted a fundraising effort for disadvantaged children led by members divided into two groups – one that distributed a brochure with all facts and figures about the children’s problems, and the second, which shared an additional story about a child in Mali. The second group received twice as much funding as the first one.

“To be successful, the storytelling effort must be ‘sticky’ – it must stick in our minds long after we’ve heard it,” said Al Falahi. “In the context of government communications, you can publicise all the policies and projects you want, but it’s how you narrate the story of these policies, why they have come about and the ability to convey it to the right target audience, that makes for good promotional strategy.”

For his part Storr said: “What storytelling adds is the right emotion, which is why it’s such an effective vehicle for delivering the message. Facts and figures are not the language of the heart. A key element of storytelling is understanding who we are communicating with, and an underrated one is specificity. For instance, how are you going to make the world a better place with your idea or policy?”

Transparent channels and efficient systems of creation and delivery also underpin the storytelling effort, said Al Khaja. “Working with government entities, I noticed something specific about what guarantees faster and better communication. The ones that give its managers the most freedom have the best end products. The message must also be clear without any excessive additions. The most important thing is to create a simple story, especially if you have to deliver it in less than two-minute segments for social media.”

The panel highlighted the “Smile, you are in Sharjah” slogan and His Highness Sheikh Dr. Sultan bin Mohamed Al Qasimi, Supreme Council Member and Ruler of Sharjah’s many books and media interviews, which are always enhanced with a personal touch on the topics, as great examples of storytelling.

The use of storytelling by the UAE government also revolves around the messages it seeks to present through the narrative, the panelists said. While establishing ministries for the Youth or Tolerance itself is a winning one in the first place, it also makes for a highly intuitive and interesting approach to governance. The UAE has also been using storytelling as a platform to spread soft diplomacy, Al Falahi noted.