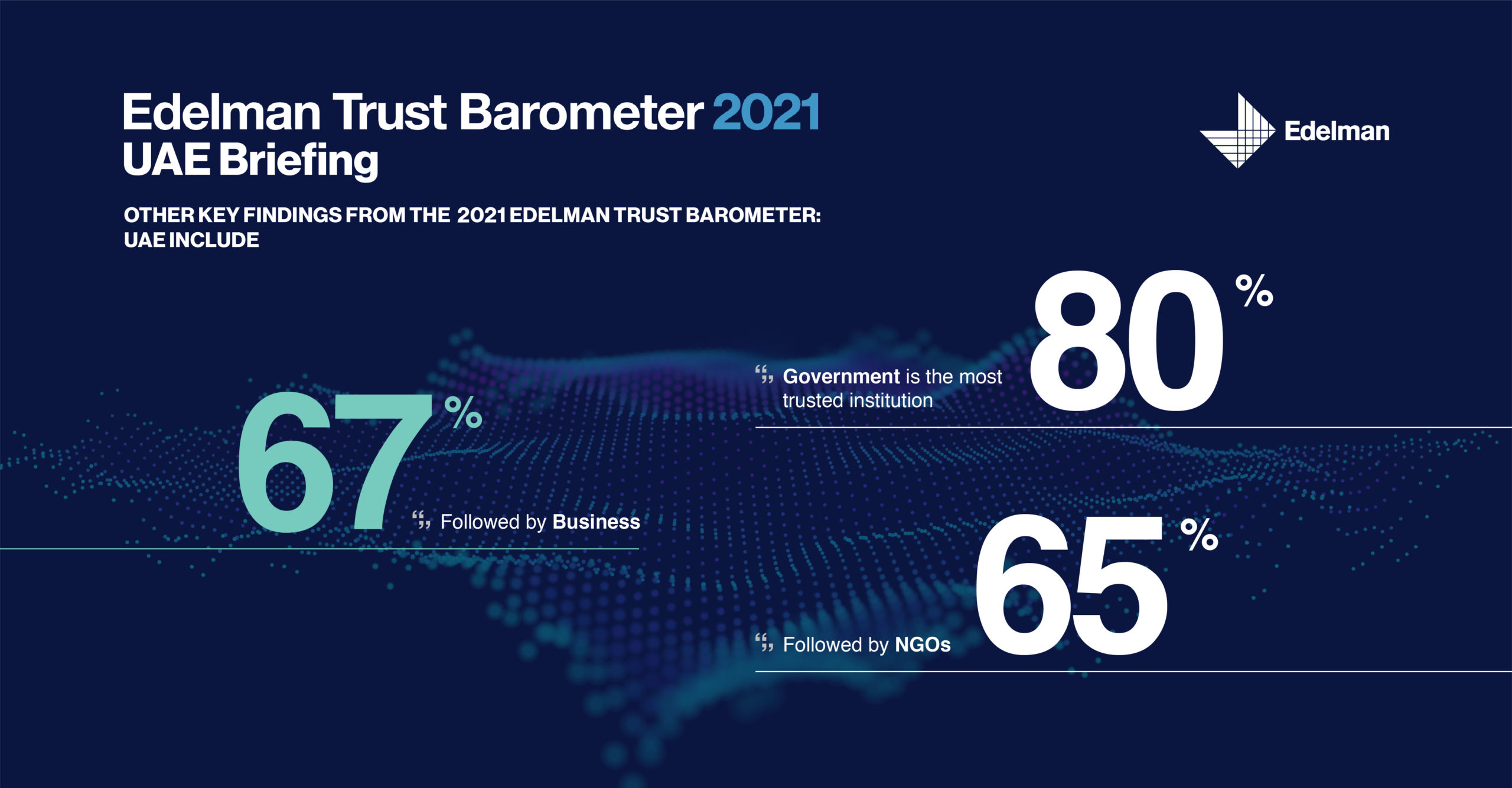 The 2021 Edelman Trust Barometer reveals strong trust in the UAE’s leadership, with Government emerging once again as the most trusted institution, at 80 per cent, and a double-digit lead over Business and NGOs. This represents a four-point increase since last year and reinforces the UAE’s position as one of the most trusted governments in the world, behind only Saudi Arabia and China, both at 82 per cent.

Government also ranked by far the highest in competence and ethics and was the only societal leader to gain trust since last year, with more than seven in 10 respondents saying they trust Government leaders to do what is right, while all other societal leaders have fallen behind. Scientists remain the most trusted, at 79 per cent, but they have also seen a four-point decrease in trust.

Research also revealed the pandemic has added to personal and societal fears, although job loss (88 per cent), and not fear of contracting COVID-19 (63 per cent), has emerged as the main concern.74 per cent of respondents have witnessed layoffs or reductions in the workforce of the company they work foras a result of the pandemic and more than half (56 per cent) worry that the pandemic will lead to increased job losses due to automation.

Omar Qirem, CEO, Edelman Middle East, said: “Accelerated fears due to the pandemic have led to a major change in people’s priorities and a shift in expectations, with an increased sense of urgency to find solutions for critical societal problems. While the UAE population’s trust in the Government to do so has increased, 71 per cent of respondents also believe CEOs, as societal leaders, should step in; with six in 10 agreeing that they should take the lead on change.”

The effects of the pandemic have also resulted in a shift in expectations for employers, with a dramatic net gain for attributes like job skills training programmes (+51 points), and worker/customer safety (+49points), along with a diverse and representative workforce (+48 points) and regular employee communications (+46 points).

“The past year was no doubt marked by uncertainty and a decline in trust in information sources, with one in two people citing their employer communications as the most believable source of information above traditional media, and just after government communications. However, retaining and increasing this trust in 2021 will be directly linked to how organisations, and their leaders, take action to meet these new societal needs, where reskilling and upskilling and a purpose-driven attitude will be crucial,” Qirem added.

The 2021 Trust Barometer is Edelman’s 21stannual trust and credibility survey. The research, conducted by Edelman Data & Intelligence (DxI), surveyed a sample of more than 33,000 respondents in 28 markets, including Nigeria for the first time, this year.

Other key findings from the 2021 Edelman Trust Barometer: UAE include