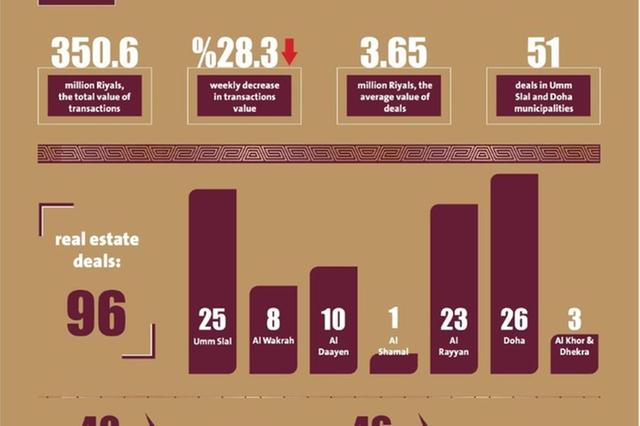 The value of real estate transactions in the State of Qatar recorded 350.6 million Riyals during the fourth week of February with a decrease of 28.3% compared to the previous week, while that period witnessed the execution of 96 real estate deals, with a growth of 21.3% and an average of 3.65 Million Riyals per deal, according to the data of the weekly real estate bulletin issued by the Real Estate Registration Department at the Ministry of Justice from 20 to 24 February 2022.

The highest deal in terms of value during the fourth week came through selling a house in the Al Sakhama zone in Al-Dayyen municipality with a value of 20 million Riyals and a price of 246 Riyals per foot with an area of 7,565 square meters.

The houses deals that were registered on the fourth week of February, amounted to 155.6 million Riyals through the execution of 40 deals, with an average of 3.9 million Riyals per deal, and their average price was 493 Riyals per foot.

Also, Umm Slal municipality witnessed the execution of 22 deals worth 48.9 million Riyals and an average of 197 Riyals per foot, where Umm Slal acquired alone 48% of the number of the total vacant deals and 44.5% of their value, while the lowest price per foot among vacant land deals was in Al Shamal municipality which recorded one deal worth 820 thousand Riyals with a price of 127 Riyals per foot.