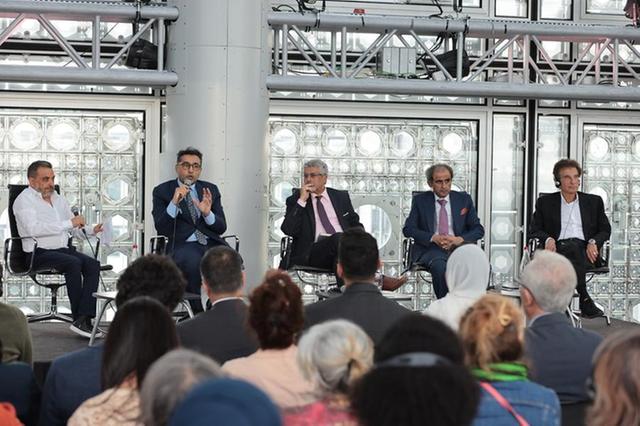 The Abu Dhabi Arabic Language Centre (ALC), part of the Department of Culture and Tourism – Abu Dhabi (DCT Abu Dhabi), has discussed the ways translation acts as a bridge between people and cultures of the world at a special event in Paris this month.

Tarjama ‘Translation’ event on 3 June, held in collaboration with the Institut du Monde Arabe (Arab World Institute) in Paris, highlighted how translating languages is a means of sharing thoughts and ideas. In a series of lectures, speakers also explored the rich history of the Arabic language and the future of the language in France.

Hosted at Institut, a world-leading establishment that supports Arab culture in France, the discussions were attended by dignitaries including Her Royal Highness Princess Haifa bint Abdul Aziz bin Muhammad Al Muqrin, Permanent Representative of the Kingdom of Saudi Arabia to UNESCO and Ambassador of the Custodian of the Two Holy Mosques to the Republic of France, His Excellency Shaikh Salem Al Qassimi, Permanent Representative of the United Arab Emirates to UNESCO, and HE Shaikh Khalifa Al Khalifa, Ambassador of the Kingdom of Bahrain to France.

The sessions highlighted ways to develop a clear plan for further translations from Arabic to French and vice versa as well as the need to create cultural initiatives to encourage institutions and publishers to provide support to train translators and improve the quality of translation.

The growth of the Arabic language in France was explored in a session titled ‘Arabic Language in France: Its Uses, Transmission and Spread’. Jacques Lang, the former French Minister of Education and Culture and President of the Institut du Monde Arabe, was joined by HE Dr. Ali bin Tamim, President of the ALC and Secretary General of the Sheikh Zayed Book Award, Saeed Hamdan Al Tunaiji, Acting Executive Director ALC, and Dr. Mujeeb Al-Zahrani, Director General of the Institut du Monde Arabe. The panellists considered how pluralism was a crucial factor in a country’s language policies.

During a session titled ‘Paris in Modern Arabic Literature’, Dr. Khalil Al-Sheikh, Acting Director of the Department of Arabic Language Education and Research at the ALC, and Frédéric Lagrange, Director of the Qualification and Research Unit for Arabic and Hebrew Studies at Sorbonne University, discussed how Paris has been used as a setting in Arabic literature to symbolise a gateway to modernity.

Lang said: “When we talk about the Arab World Institute, we refer to the cooperation and harmony between Arabic and European cultures, and to the Institute’s role as a bridge between the Islamic world and Europe, as it seeks to promote and raise the status of Arab language and culture, a role shared with the Abu Dhabi Arabic Language Centre.”

Lang said the ALC and the Institut would continue to work together to organise conferences and cultural events in their efforts to promote learning and the spread of the Arabic language in the world. He stressed the importance of cooperation to translate works issued in Arabic into French, and French into Arabic.

One of the most prominent agreements between the ALC and the Arab World Institute is the CIMA (Certificat International de Maîtrise en Arabe – International Certificate for Proficiency in Arabic) certification. Developed by the Institut du Monde Arabe, CIMA is the first internationally recognised certification to assess proficiency in modern standard Arabic. The initiative was founded in 2018 to encourage non-Arabic speakers to learn and master the language and has been strongly promoted by the ALC.

HE Dr. bin Tamim said: “We have a very important relationship with the Arab World Institute in Paris, which enjoys a prominent presence in the field of modern Arabic literature. This event serves the two cultures through their languages, which both have rich and significant histories. Both languages are manifested in all forms of life, art and science, to the extent that we can count hundreds of words circulating in French of Arabic origin, and the same in Arabic.

“We discussed the future of the Arabic language in France, which is the second most-spoken language in the country, and we explored ways to consolidate its position as a leading language of culture and knowledge with peoples and cultures around the world. We seek, through our recommendations, to strengthen its role as a bridge that introduces global civilisations to our Arab and Emirati culture in a broader and more comprehensive way.”

Al Tunaiji said: “This event highlighted key topics, including the Kalima project for translation, which provides Arabic readers with treasures from world literature covering multiple languages and cultures. This project placed special importance on the French language, as cooperation agreements signed with a large number of prestigious French publishers resulted in the translation of more than 1,181 books in many fields.”

He added, “Organising these seminars enhances the ties of openness and cooperation that unite us with the Institut, supports our shared cultural movement, and embodies a model for cultural openness and cultural communication.”