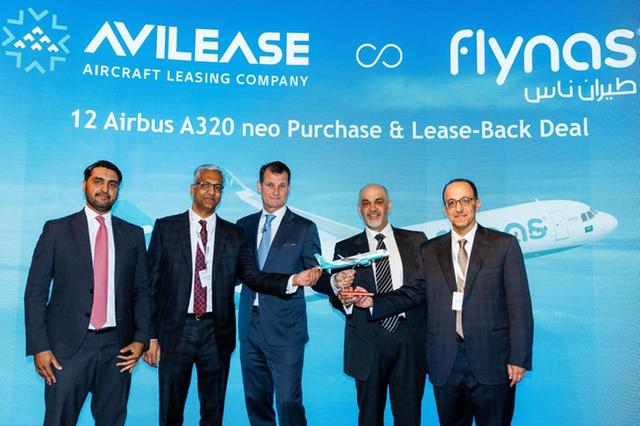 AviLease, a newly established aviation financing and leasing company wholly ownedby the Public Investment Fund (PIF), officially launched today. At the launch event, which took place in London, UK, to coincide with Farnborough International Airshow week, AviLease signed its first leasing agreement, with leading low-cost-airline Flynas, which will see AviLease purchase twelve new A320neo aircraft to be delivered in 2022 and 2023, and leased back to Flynas.

AviLease aims to be a leading institution across the aviation leasing value chain, maintaining an optimal portfolio of assets with its core focus on leasing, trading and asset management services. The company plans to become a leader in the aircraft leasing market.

The launch event and signing was attended by senior executives from leading global aircraft manufacturers, airlines, financial institutions, aviation supply chain partners, and the senior leadership of PIF and AviLease.  The occassion officially marks the launch of the new company, with the Flynas deal its first milestone.

Fahad AlSaif, Chairman of AviLease, said, “AviLease is launching with ambitious plans. We are delighted to have our first agreement in place with Flynas. Today marks the start of the journey to become a leader in the aircraft leasing market. AviLease is going to have a critical role enabling the PIF’s aviation sector strategy in Saudi Arabia, contributing to the Kingdom’s 2030 Vision.”

Ayed Aljeaid, Chairman of Flynas, said, “We congratulate PIF on the launch of a new aircraft leasing company, AviLease, and are pleased to announce the signing of this agreement. As a Saudi air carrier and the leading low-cost airline in the Middle East, we see great opportunities for expansion supported by the strategic location of Saudi Arabia and the prospects opened by Vision 2030 for the air transport sector”.

Edward O’Byrne, Chief Executive Officer of AviLease, said, “Our company has global ambition and the robust financial backing of PIF. We are ready to capitalize on the strong and growing Saudi market to scale rapidly and become a leading aviation lessor. Our plan is to invest in the most technologically advanced aircraft to enable airlines operate the most fuel-efficient and environment-friendly fleet. We appreciate the confidence placed in us by the Flynas team and wish them continued success as we start our partnership with them.”

Bander Almohanna, Chief Executive Officer and Managing Director of Flynas, said, “These twelve new A320neo aircraft will help us continue to grow our modern and fuel-efficient fleet. This commitment supports our business strategy and advances our company’s ambitious agenda with a new partner, AviLease”.

“The agreement will help Flynas’ ambitious efforts to support the National Aviation Strategy, which aims to increase the annual passenger traffic to 330 million and connect Saudi Arabia with more than 250 destinations worldwide by 2030”.

AviLease underlines PIF’s mandate to unlock the capabilities of priority sectors that can support the diversification of Saudi Arabia’s economy and contribute to non-oil GDP growth. In addition, the company will be supporting a thriving aviation sector and driving financial sustainability within the aviation ecosystem in line with Vision 2030.

AviLease is an aviation financing and leasing firm investing in the latest generation aircraft by way of purchase and lease-back transactions, secondary portfolio & corporate acquisitions and direct orders from aircraft manufacturers.

Wholly owned by PIF, AviLease has robust financial backing which will support its vision and rapid growth ambitions. Founded in June 2022, AviLease is headquartered in Riyadh, Saudi Arabia. The company’s fleet will consist of the latest generation of narrow-body and wide-body aircraft from the world’s leading   manufacturers.

An experienced international management team will lead the company’s growth, localize knowledge and expertise, and enable the development of the company’s infrastructure to become a national champion in the aircraft leasing market.

AviLease is a core element of Saudi Arabia’s expanding aviation ecosystem and part of the country’s Aviation Strategy to develop the leading aviation sector in the Middle East.

flynas is a leading Saudi Arabian low-cost carrier with 38 aircraft, operating more than 1500 weekly flights to 35 domestic and international destinations.

Since its launch in 2007, flynas has transported more than 60 million passengers, a number that has steadily grown since its establishment.

flynas offers its guests the best value for money through competitive fares, timely flights, and superior customer service, which has earned several accolades, including the Middle East’s Leading Low-Cost Airline award from the World Travel Awards for seven consecutive years (from 2015 till 2021) as well as the prestigious Skytrax award for Middle East’s Best Low-Cost Airline in (from 2017 till 2021).

flynas continues to grow and invest in its product with an agreement with Airbus to purchase 120 new A320neo aircraft. flynas is proud to receive its 25 Airbus A320neo aircraft and add them to its fleet.