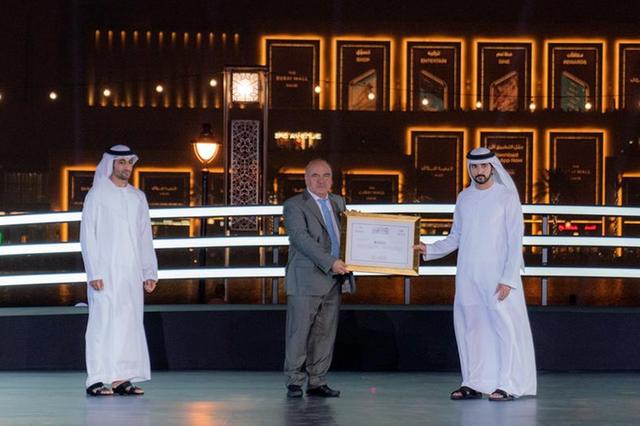 Azizi Developments, a leading private developer in the UAE, has received a prestigious Appreciation Award from His Highness Sheikh Hamdan bin Mohammed bin Rashid Al Maktoum, Crown Prince of Dubai, and Chairman of The Executive Council of Dubai for its numerous contributions and support, in light of the Dubai World Cup.

In his comments, Mr Mirwais Azizi, Founder and Chairman of Azizi Developments, said: “We are deeply honoured to receive this highly esteemed award from His Highness Sheikh Hamdan bin Mohammed bin Rashid Al Maktoum himself. It is a testament to our continuous pursuit of catalysing the UAE’s growth and development, and advancing its standing as the ideal hub for business and tourism, with monumental events such as the Dubai World Cup solidifying its prowess on the world stage. This accolade recognises our philosophy and unwavering endeavour of bringing communities together, supporting the UAE’s heritage, vision, and development, and strengthening Dubai’s international repute.”

With tens of thousands of homes successfully delivered to local and international investors and end users of over 100 nationalities, Azizi Developments prides itself on its extensive portfolio of modern luxury developments across Dubai’s most sought-after residential destinations, its construction-driven approach, and its commitment to transparency and customer centricity. Azizi’s residential and commercial properties are investor friendly, catering to all lifestyles. The developer makes it its international mission to develop lifestyles and enrich the lives of its residents with a focus on catalysing the vision and development of the markets that it operates in.

Azizi Developments has sponsored the Dubai World Cup for five consecutive years, among a multitude of other events and charitable causes, including the Rashid Centre for People of Determination for four years running, Zayed Humanitarian Day in conjunction with the Ministry of Interior, the Shabab Al Ahli Dubai Club and more.

Azizi currently has approximately 100 ongoing projects that are to be delivered by 2023, and an additional 100+ projects in planning, worth several billion US dollars, that are projected to be delivered between 2023 and 2025. The company has a strong track record and sizeable project pipeline through its extensive land bank and strategic partnerships with Dubai’s key master developers and is instrumental in developing world-class properties in MBR City, Palm Jumeirah, Dubai Healthcare City, Al Furjan, Studio City, Sports City and Downtown Jebel Ali.