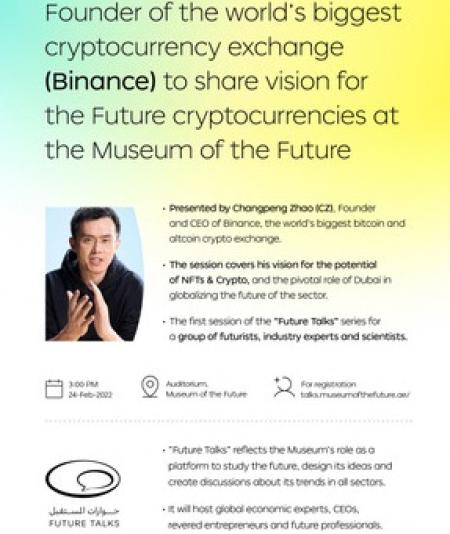 The Museum of the Future will host guest of honour Changpeng Zhao, Founder and CEO of Binance, the world’s biggest bitcoin and altcoin crypto exchange by volume, on the first session in a special series of Talks hosted at the iconic structure.

The “Future Talks” will see prominent futurists, industry experts and scientists offering unique insights into the greatest challenges humanity will face in the future. The initiative is part of the Museum’s mission to create a platform where the world’s brightest minds meet and collaborate to design innovative solutions for tomorrow’s world.

In his Talk, Zhao will discuss his experience before launching Binance, which began by building large-scale trading systems for brokerage firms on Wall Street. And the potential of NFTs, Today, Binance has a trading value of US$2 trillion, while its own cryptocurrency, known as Binance Coin (BNB), is ranked third globally in terms of market share. He will also share his vision for the future of finance, the potential future applications of cryptocurrencies and blockchain technology, and the pivotal role of Dubai in globalizing the future of the sector.

The successful life story of Changpeng, a Chinese-Canadian businessman, is an inspiring model for youth to face challenges and achieve their dreams. He lived a humble childhood with his family after they moved from China to Canada, and had to work in restaurants during his adolescent years before he later had the opportunity to study computer science.

His first step in the world of independent trading was the establishment of the company Fusion Systems in Shanghai, a trading platform for brokers and one of the fastest digital trading systems in the world.

Zhao was a member of the founding team of Blockchain Info, before he later took a senior position with cryptocurrency company OKCoin, to later leave and announce the establishment of Binance after raising US$15 million through an initial cryptocurrency offering. The company turned into the world’s largest cryptocurrency exchange by trading volume, and in 2018, Zhao launched Binance Smart Chain, which focuses on decentralized financing solutions.

Passion for Dubai and its Pioneering Experience

Zhao tells a long story of admiration for the pioneering city experience in Dubai, the great opportunities it offers to empower creators and innovators, and its contribution to shaping the future of humanity.

Zhao had announced last November that he had bought an apartment in Dubai, which he described as a “friendly city for crypto-financial solutions”, praising the government’s future-proof vision and the city’s business environment. During the conference in Singapore where he made the announcement, Zhao rocked the world as he was known to have previously insisted on not owning fixed assets such as homes and cars, but he clarified that the decision resulted from his desire to show his level of commitment to Dubai.

There are many bridges of cooperation between Changpeng, his leading company, Binance, and Dubai with its various government and investment agencies. Towards the end of 2021, the Dubai World Trade Centre Authority signed a cooperation agreement with Binance, with the aim of establishing an integrated system for the virtual assets sector that contributes to strengthening Dubai’s position as a leading global hub.

Binance has also chosen to organize its largest digital blockchain conference attracting senior industry experts from the region and the world, from March 28 to 30 in Dubai.

Changpeng Zhao’s session is part of a series of nine talks that the Museum of the Future plans to hold from February 24 to March 29, directly in the museum hall, and is open to the public free of charge, subject to prior registration via the website https://talks.museumofthefuture.ae/.

“Future talks” aim to explore the future industry and enhance the ability of research institutions to anticipate the future, as well as celebrate the genius and scientists and institutionalize, design and manufacture the future, reflecting the role of the museum, which represents a global intellectual center that brings together international partners and specialized research institutions to study current and future challenges in depth and boldness to provide new and innovative solutions.