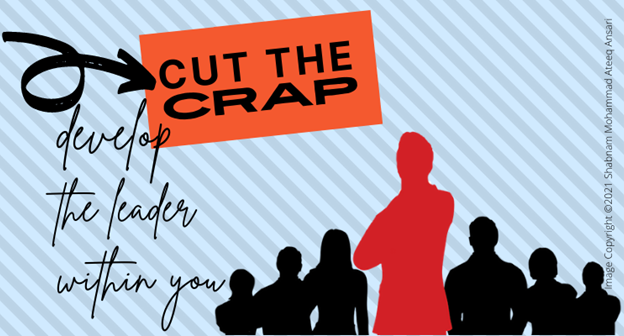 Yeah, right. You think leadership is important. I know because you are reading this article.

First, get the crap out of the way.

Crap means ‘leadership’ stuff that doesn’t work. It’s out there – cloaked as a book, blog, course or article (including this one, you ask?). Dov Frohman says, “I am skeptical these will produce more or better leaders. At the very moment of so many efforts to teach leadership, we are experiencing widespread, persistent failures of leadership. There is a disconnect between the celebration of leadership and the ability to practice it.”

Joe Iarocci says, “Lack of training or expertise does not prevent people with opinions about leadership from being potential book-writers.”

Great leaders say stuff that gets popular. Some of it is crap. Don’t believe me? Check out Jesse Lyn Stoner’s compilation The 10 WORST Popular Leadership Quotes

Six ideas about leadership that derail your development as a leader:

If you are not a leader, it’s your fault.

The chances of emerging as a leader are close to none if the organization is not a good fit or rife with cut-throat politics.

The guy in a leadership position is a leader.

Rob Campbell says, “Transactions, though they can be mutually beneficial, are, at their core, acts void of any relationship. Leadership is not transactional.”

Leaders are made, not born.

The notion is politically correct, inclusive and makes you say, “whew! that’s a relief”. After all, it feels lousy to know you got shortchanged on leadership DNA. But it’s not true. After decades of pushing the notion that leaders are made, not born, academicians acknowledge the ‘nativist’ premise – leaders are born.

Having said that, leadership in a crisis is an imperative, an obligation. When the organization or crew is in distress, you don’t shrug and say, “ain’t got leadership genes”.

A Harvard leadership course shares the case study of Shackleton who transformed into a leader when his ship gets stuck in a frozen sea. In the privacy of his diary, Shackleton wrote, “A man must shape himself to a new mark as the old one goes to ground. I pray to God, that I can get the crew to civilization”.

Shakespeare said, “Some are born great, some achieve greatness, and some have greatness thrust upon them.”

Leaders are born and made.

Leadership is a panacea.

Managers may evolve into managerial leaders. Or not, and that’s fine. Leadership is a tough act. It’s not for everybody.

Leaders can fix it.

“So much is written about leaders because we believe that our fate, and the fate of our organizations, is in their hands and ought to be”, say Jeffrey Pfeffer and Robert Sutton.

They add, ”Leaders make a big difference, except when they don’t. Leaders and managers often have far less influence over performance than most people think.”

You can learn leadership without observing leaders at work.

Crises have transformed weak men into leaders. But it is not an efficient model for learning leadership. Because a crisis is the time to apply leadership.

Books, blogs, courses and articles expose you to the depth and breadth of leadership. These are frames of reference and pegs for thoughts, but won’t make you a leader. For example, John C. Maxwell’s book, ‘Developing The Leader Within You’ gives me goosebumps. Because it is the blueprint of a leader I know and have observed for over a decade. Sort of like – Man! How does John Maxwell know? If I hadn’t observed a leader in action, the book would be ‘just another book’ offering well-meaning advice towards an idealized state of leadership.

Dov Frohman says, “The very forces that make leadership valuable also make teaching it extremely difficult. By definition, it can’t be done ‘by the book’. There is a disconnect between how we ‘do’ leadership and how experts in the field talk about it”.

Leadership is learnt by observing leaders at work. And there is a side benefit. The unfolding of a leader’s character and decisions into positive change is a treat to watch, yum-yum.

Should you care about being a leader?

The purpose of being a leader is to

Jeff Immelt shares, “Leadership is a long journey into your own soul”. Should you care about being a leader? You know the answer better than anyone else. If the answer is yes, read on.

A legacy is built around what you care for, want to be remembered for, and what the future generations need to succeed. It is about leaving a do-able roadmap, a hack, a narrative, a live-as-example of what will inspire, support and serve future leaders.

Legacy is an inseparable component of leadership. You know you have succeeded when future leaders learn, reflect, and extract meaning from your work.

What does a legacy look like? Here are examples you recognize:

–     An event manager redefines the way trade show booths are designed. The impact and aesthetics become a legacy.

–     A marketing executive builds a high-performance toolkit with free and low-cost software. The ROI, out-of-the-box thinking and the methodology become a legacy.

–     An administration manager is at work on the dot for over a decade. He does not intend to build a legacy; it becomes one. A legacy of responsibility, accountability and self-discipline.

–     An organization benchmarks itself to the highest standards of customer service. The business ethic becomes a legacy, a matter of pride and the source of timeless stories to inspire future leaders.

Sukhdeep Sachdev says, “Stand on the shoulders of giants. Draw upon the wisdom, knowledge and expertise of a mentor, role model, book or business associate. Use your sharp senses for more than a zero-sum game. Build a legacy.” He quotes Viktor Frankl from the book ‘Man’s Search For Meaning’:

“Man must not ask what the meaning of his life is, rather he must recognize it is he who has been asked.”

Creating a climate for tomorrow’s leaders

It is an imperative, not a choice. Why? John Maxwell says, “Those closest to the leader will determine the success level of that leader.”

– Empowerment as a learning tool for young leaders – Show, tell, teach by example. Then empower them to make critical decisions. Expect them to fall, fail and figure it out.

–     Organizational protocols that support leadership – Simply put, don’t set up young leaders to fail. For example, if they must obtain approval from several departmental heads for each step or initiative, then time, momentum, and enthusiasm are lost.

–     Active participation of top management – Building a climate for tomorrow’s leaders is a top-down exercise led by the executive team, not the training department.

– Modeling leadership – means not only being an example but also interpreting the rationale of your actions to young leaders. It means engaging in dialogue, tapping into their creativity and enjoying the process.

Edwin Markham’s poem sums up the rationale of creating a climate for tomorrow’s leaders:

We are blind until we see

That in the human plan

Nothing is worth the making

If it does not make the man.

Why build these cities glorious

In vain we build the world

Unless the builder also grows

Leadership In A Crisis

Bill George encountered his first business crisis at age 27. He had joined Litton Industries as Assistant General Manager when the news came in. The Surgeon General declared microwave ovens may be hazardous to health. Litton Industries had one product – microwave ovens. After months of wrestling with the challenges that followed, Bill George said, “In business school, I never realized it was this hard to make money.”

The crisis taught him to

– uncover the root cause of a problem

–     decode the mind-set of industry regulators

–     not judge leadership before knowing what is going on

Ansari Shabnam Ateeq is the Chief Knowledge Officer at a global distribution network serving education, life sciences, and medical technology verticals. She is a Certified Professional in Talent Development (CPTD®) from the Association for Talent Development (ATD), USA. She is a Project Management Professional (PMP®) certified by the Project Management Institute (PMI), USA. She has a postgraduate degree in Business Administration with specializations in Marketing & Human Resources. She holds the Level 8 qualification in Strategic Management and Leadership from Qualifi UK. She is a Professional Reader in the genres — business, self-help and workplace culture. She is the illustrator of the book 11 CEO Habits - Wake Up The CEO Within You.