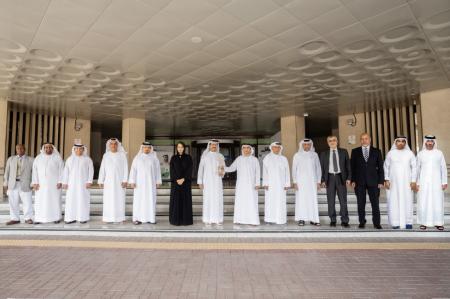 Under the patronage of HH Sheikh Mohamed bin Zayed Al Nahyan, Crown Prince of Abu Dhabi and Deputy Supreme Commander of the UAE Armed Forces, Dubai Electricity and Water Authority (DEWA) has been awarded the Sheikh Khalifa Excellence Award (SKEA) in the Elite Category. DEWA received the Award during the closing ceremony, which was attended by HE Saeed Abdul Jalil Al Fahim, Chairman of the Higher Committee of SKEA; HE Abdullah Mohamed Al Mazrouei, Chairman of Abu Dhabi Chamber; and several Abu Dhabi Chamber Board Members. DEWA scored 850 in the evaluation, the highest score in the Award history since its launch in 1999, surpassing over 200 local and regional organisations that participated in this round of the Award.

HE Saeed Mohammed Al Tayer, MD & CEO of DEWA, expressed his happiness on this achievement. He affirmed that winning the Sheikh Khalifa Excellence Award in the Excellence Elite category underlines DEWA’s commitment to the wise leadership’s vision to make the UAE Government a global benchmark for government excellence. The UAE Government has become one of the most competent and developed governments worldwide, leading global competitiveness indexes across all sectors.

“We are honoured to receive this Award which holds the name of His Highness Sheikh Khalifa bin Zayed Al Nahyan, President of the UAE, who always highlights the importance of excellence and to make the UAE government one of the best in the world. We are immensely pleased to note that DEWA is the first organisation to win in the Excellence Elite Category, which was introduced based on the widespread and global recognition the Award has received over the past years. At DEWA, we work in line with the vision and directives of His Highness Sheikh Mohammed bin Rashid Al Maktoum, Vice President and Prime Minister of the UAE and Ruler of Dubai, to continue our excellence journey in all areas. We consider excellence as our main pillar to achieve our vision to become a globally leading sustainable innovative corporation. At DEWA, excellence is a daily work programme that we implement according to specific strategies and plans. We have institutionalised a culture of excellence based on total quality management and sustainable excellence standards to achieve the happiness of customers and society as a whole,” said Al Tayer.

Al Tayer commended the Sheikh Khalifa Excellence Award for its role in developing the standards of sustainable excellence and its impact on enhancing excellence in the UAE by recognising excellence and excellent individuals across different sectors. He thanked the Chairman and Board Members of Abu Dhabi Chamber and the Chairman and members of the Higher Committee of SKEA, commending their efforts over the past period, despite the challenges associated with the COVID-19 pandemic.

Waleed Bin Salman, Executive Vice President of Business Development and Excellence at DEWA, emphasised that receiving the Sheikh Khalifa Excellence Award in the Excellence Elite category and the highest score in its history, underlines DEWA’s global position in different areas of excellence. DEWA has become a benchmark for developing and implementing the highest standards and practices of excellence in all its activities and operations.

The Award’s committee has over 250 experts, specialists, and representatives from major global organisations. SKEA’s higher committee unanimously selected DEWA to test the new SKEA 2021 Global Framework for Excellence designed for the post-COVID-19 world. This recognises DEWA’s achievements and its excellent performance during this edition of the Award.