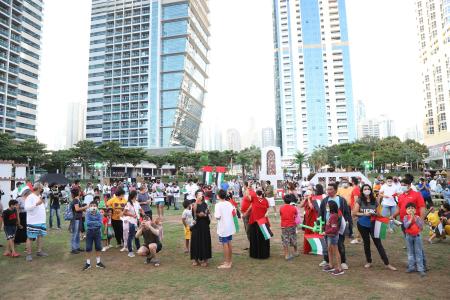 DMCC – the world’s flagship Free Zone and Government of Dubai Authority on commodities trade and enterprise – celebrated the United Arab Emirates’ 50th National Day with a raft of activities that pay tribute to the nation’s rich culture and heritage. To mark the Golden Jubilee, DMCC launched a 50-day celebratory campaign, culminating with a main event in the Jumeirah Lakes Towers (JLT) Park on 2 December.

In the five weeks leading up to the nation’s 50th anniversary, DMCC launched a Golden Jubilee Challenge, putting the knowledge of residents and visitors of the JLT community to the test for a chance to win over AED 50,000 in prizes. Totem poles were spread throughout the community with a QR code to enter the quiz. A total of over 1,000 people registered and tried their luck and the prize winners were announced at the celebrations.

On the occasion of UAE National Day, Ahmed Bin Sulayem, Executive Chairman and Chief Executive Officer, DMCC, said: “Today, we celebrate 50 years of innovation and progress, paying homage to our young country’s countless achievements and successes. Our founding father, the late Sheikh Zayed bin Sultan Al Nahyan, was a true visionary and his legacy is kept alive with the current wise leadership. We all have a duty to support them in looking at the Next 50 with the same determination and foresight, to ensure our nation remains a beacon of development and prosperity by staying true to our culture, heritage and values, and by repeatedly ensuring we make the impossible possible.”

DMCC’s campaign forms part of a nationwide campaign to celebrate the UAE’s 50th anniversary, organised by the UAE’s Golden Jubilee Celebration Committee. Highlighting the deep connections between people and nature, the official celebration at the Hatta Dam will showcase the UAE’s history, present and future.