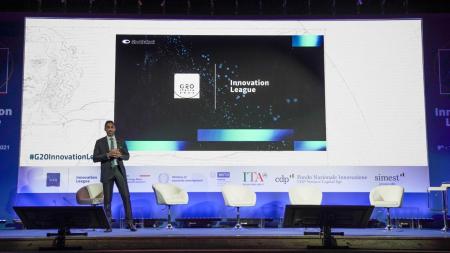 Dubai Future Foundation (DFF) participated in the G20 Innovation League, a special event hosted by the G20 Italian presidency under the Trade Ministerial Track to build synergies between innovation drivers from the public and private sectors worldwide, with Luigi Di Maio, Italian Minister of Foreign Affairs and International Cooperation, and Jose Ángel Gurría, former Secretary-General of the Organisation of Economic Co-operation and Development (OECD), among attendees.

The Foundation invited attendees to participate in the newly launched initiative “Dubai Future Solutions,” announced yesterday by His Highness Sheikh Hamdan bin Mohammed bin Rashid Al Maktoum, Crown Prince of Dubai, Chairman of The Executive Council of Dubai, and Chairman of the Board of Trustees of Dubai Future Foundation. The initiative invites scientists, designers, makers, technologists, companies, universities, research centers, startups, and talent from all around the world to come up with innovative solutions to challenges of the future to disrupt current industries and improve lives with a grand prize of up to US$10 million.

In a stand-alone session under the theme of ‘Innovation, startup and Expo Dubai 2020’, HE Khalfan Belhoul, CEO of Dubai Future Foundation, highlighted this global initiative to develop solutions to the most pressing challenges facing vital sectors leveraging advanced technology to serve humanity.

With a focus on energy, transportation, health, education, AI, and data, the initiative allows innovators to test their pioneering ideas within Dubai’s integrated innovation ecosystem.

The participants learned about the objectives of this initiative and its inaugural challenge, which aims at attracting innovative talents to develop batteries with enhanced performance and durability withstanding harsh weather conditions and benefiting various vital sectors such as space transportation, logistics, and others.

DFF’s representation at the global dialogue testifies to its strong reputation as a thought leader in innovation and the high interest of innovation stakeholders in the UAE’s business climate.

The participants also had the opportunity to learn about the Dubai Future Foundation programs and initiatives and their role in supporting the local, regional and global innovation and entrepreneurship system. The Foundation’s participation in this summit confirms its leading position in foresight and futuristic and innovative thinking and builds on decades of cordial relations between the UAE and Italy, DFF enjoys a productive cooperation with its Italian partners. Earlier this year, the Foundation joined forces with ITA to organize the second edition of the Global Startup Program, an initiative of the Italian Ministry of Foreign Affairs and International Cooperation.

In a stand-alone session under the theme of ‘Innovation, startup and Expo Dubai 2020′, Belhoul highlighted that Dubai is an ideal destination that unifies global efforts in designing a better future for humanity due to its success in developing an innovative ecosystem that provides the opportunity for government entities, private sector, and startups to take part in the innovating and designing the future by employing technology to serve humanity.

Belhoul added: “Dubai is a land of opportunities for entrepreneurs and emerging companies to develop and implement future solutions for global changes through its advanced infrastructure and agile legislative system.

He added: “Expo 2020 Dubai, launched a few days ago, aims at “Connecting Minds, Creating the Future,” embodying Dubai’s vision for the future to be a hub for talents from all over the world where they can create and innovate within the UAE, which aligns with the vision of Dubai Future Foundation.

Luigi Di Maio, Italian Minister of Foreign Affairs and International Cooperation, said: “Innovation is the keystone to bridging the present with the future and is an important building block of modern, robust societies. We are tremendously pleased and proud therefore that theG20Innovation League has attracted a huge amount of global attention and inspired international partnerships across the public and private sector. As an emerging global innovation hub, we are particularly pleased to have representatives from the UAE on board and look forward to a fruitful ongoing relationship between our two countries in the innovation space.”

In his inspirational speech, guest of honor Ángel Gurría said: “It was great to participate in the meeting of the G20 Innovation League . It is a far reaching game-changer and we have to thank Minister Luigi di Maio for the initiative. But it was doubly exciting because among the G20 members and their guests was Dubai, now the host of the EXPO 2020/21 and an up and coming economy which has to rely increasingly on the knowledge and the talent of its own people, its research centers and its universities. Dubai was very well represented by the Dubai Future Foundation, (Khalfan Belhoul) and we were all very thrilled when it was announced that Dubai was joining the initiative and when the announcement was made during the meeting itself. This is a good omen both for Dubai as well as for the countries that already decided and those who will decide to join the initiative going forward”.

Carlo Ferro, President of Italian Trade Agency said: “The participation of His Excellency Khalfan Belhoul in the G20 Innovation League solidifies the long-standing, friendly bilateral ties between Italy and the UAE. Against a backdrop of supply chain challenges and global economic uncertainty, it is vital that developed countries draw on innovative mechanisms and solutions to facilitate prosperous and sustainable global trade. We believe Italy and the UAE are exemplary in their innovative approach to trade and hope more nations will follow suit to the benefit of the global community.”

Speaking on the sidelines of the event, Mauro Alfonso, CEO of SIMEST, an Italian company that helps the nation’s businesses succeed on an international level, said: “I was delighted to hear about the launch of Dubai Future Solutions, a very timely and important initiative. Here in Italy, we have a wealth of innovative startups that want to use their capabilities for the greater good, and the challenge provides them with a global platform to realize their ambitions.”

In his final remarks, Manlio Di Stefano, Italian Undersecretary of Foreign Affairs and International Cooperation, said: “This year’s first edition of G20 Innovation League has created a bridge between G20 and the world of startups, bringing fresh ideas and innovation to the world leaders’ debate on International trade. I had the possibility to discuss all possible implications of this successful event with CEO of Dubai Future Foundation Khalfan Belhoul.

The format of G20 Innovation League, which involves at the same time startups, venture capitalists and big corporates, has tremendous potential to find solutions to the world problems. I am proud that this magical formula will be replicated also in the next 2022 G20 Indonesian Presidency: a very good legacy to make G20 Trade more open to the world of SMEs and startups.”