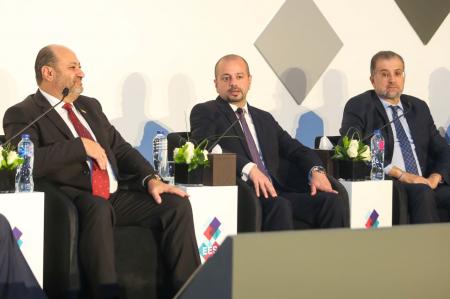 Hany Aman, the Managing Director and CEO of the Eastern Company, said that the state has been supporting the industrial sector, pointing out that the economic reform program allowed the company to develop which was reflected in achieving tremendous growth over the past two years and record sales and profits.

This came during the second session of the Third Edition of Egypt Economic Summit, which was held under the auspices of Dr. Mostafa Madbouly, Prime Minister, under the title “Industry as the key driver for investment”, in the presence and participation of Engineer Haitham Sadek, General Manager of Danone Egypt and North East Africa, Hany Aman, Managing Director and CEO of Eastern Company, Tarek Zaghloul, CEO of CMA CGM Egypt & Sudan Cluster, Eng. Bassel Shoirah, General Manager of Polaris Parks. The session was moderated by Dr. Mohamed El-Baz, Chairman and Editor-in-Chief of Al-Dostor Newspaper.

Aman added that the company thought out of the box and considered improving the inputs, in cooperation with various state authorities. “Previously, we were a company affiliated with the business sector.

Then we turned into a private company less than 3 years ago, with a board of directors that includes global experts from different fields, managing the company with clear strategies.” He pointed out that the Eastern Company is the largest industrial entity in Egypt, and one of the 100 largest companies in the Middle East according to Forbes. He added that various performance indicators were developed which contributed to achieving unprecedented successes, as well as professional planning. A number of decisions were taken to boost development, deal with staff, and implement innovative ideas.

In terms of what the economic system in Egypt is lacking in order to entice growth, Aman said that there is an economic reform program which has yielded positive results. This means that there are robust steps taken, but stronger interaction between entities and companies in all procedures needs to happen in order to provide the necessary support. He added that the administrative sector has not witnessed the required development, pointing out that permits need more time than necessary due to procedures and routines.

He further explained that the daily amount of cash is about EGP 1 billion per day, or more precisely, the product goes through 4 stages during its cycle starting from the company until it reaches the consumer. As such, we were keen to be part of the digital transformational system where we use financial and technological means to manage this volume of operations, Aman concluded.

Eng. Bassel Shoirah, General Manager of Polaris Parks, said that industrial development companies are considered an index for the national industry as they are more concerned with attracting huge foreign investments. He added that 7 years ago, industrial development companies were facing difficulty in attracting Investors. However, huge development in legislation and infrastructure has been made which contributed to persuading investors to pump investments in Egypt.

Moreover, the state has finished the difficult part in terms of facilitating investments where these changes occurred at a challenging time as the map of the global industry was changing.

Shoirah agreed with what Hany Aman, Managing Director and CEO of the Eastern Company, said about the need to continue achieving administrative reform in the government apparatus to facilitate the implementation of investments. He added that the success of current investors to implement and push new investments helps in promoting investment in Egypt and ultimately, attracting new investments.

Tarek Zaghloul, CEO of CMA CGM Egypt & Sudan Cluster, said that the economic reform program focused on exploiting Egypt’s strategic location and developing ports, railways, roads and axes, noting that Rodolphe Saadé, CEO of the French shipping company CMA CGM, met with President Abdel Fattah El-Sisi last January and they agreed on the participation in Tahya Misr port in Alexandria, where the company promises to build the latest port that meets all Egyptian demands. In addition, they are studying investment opportunities in dry ports in the near future.

Zaghloul added that the development of infrastructure and sea and dry ports contributes to reducing the cost for Egyptian exporters, which compete with investors in neighboring countries. Moreover, the low cost contributes to achieving the goal of reaching Egyptian exports worth $100 billion annually.

On his part, Haitham Sadek, General Manager of Danone Egypt and North East Africa, said that the success of the Egyptian economy in achieving high growth rates and increasing the company’s sales in Egypt during the past year by 25% prompted the management of the parent company Danone to demand the company in Egypt to double the volume of sales above the target rates. He explained that Danone Egypt achieved high sales last year, making it the highest sales volume for Danone in Africa and the Middle East, and therefore it was chosen to represent the region to present the financial results to the CEO of the parent company. “During this presentation, I shared the experience of Egypt in developing the infrastructure and achieving huge sales, and our ambition within 3 years to double sales, but the CEO demanded more than that during this period as a result of his confidence in the Egyptian economy,” Sadek stated.

Sadek added that Danone seeks to deepen local manufacturing which has reached 70% of the total products, but the company is facing difficulty in increasing sales during the last period, due to the unavailability of some imported raw materials, some of which they import from less industrialized countries compared to Egypt. Sadek pointed out that there are local companies that are willing to locally produce these raw materials, but they face obstacles and challenges towards achieving this goal. Sadek hoped the government would implement programs to enhance and support local manufacturing, while providing qualified technical cadres to companies, to meet the increased investments during the coming period.