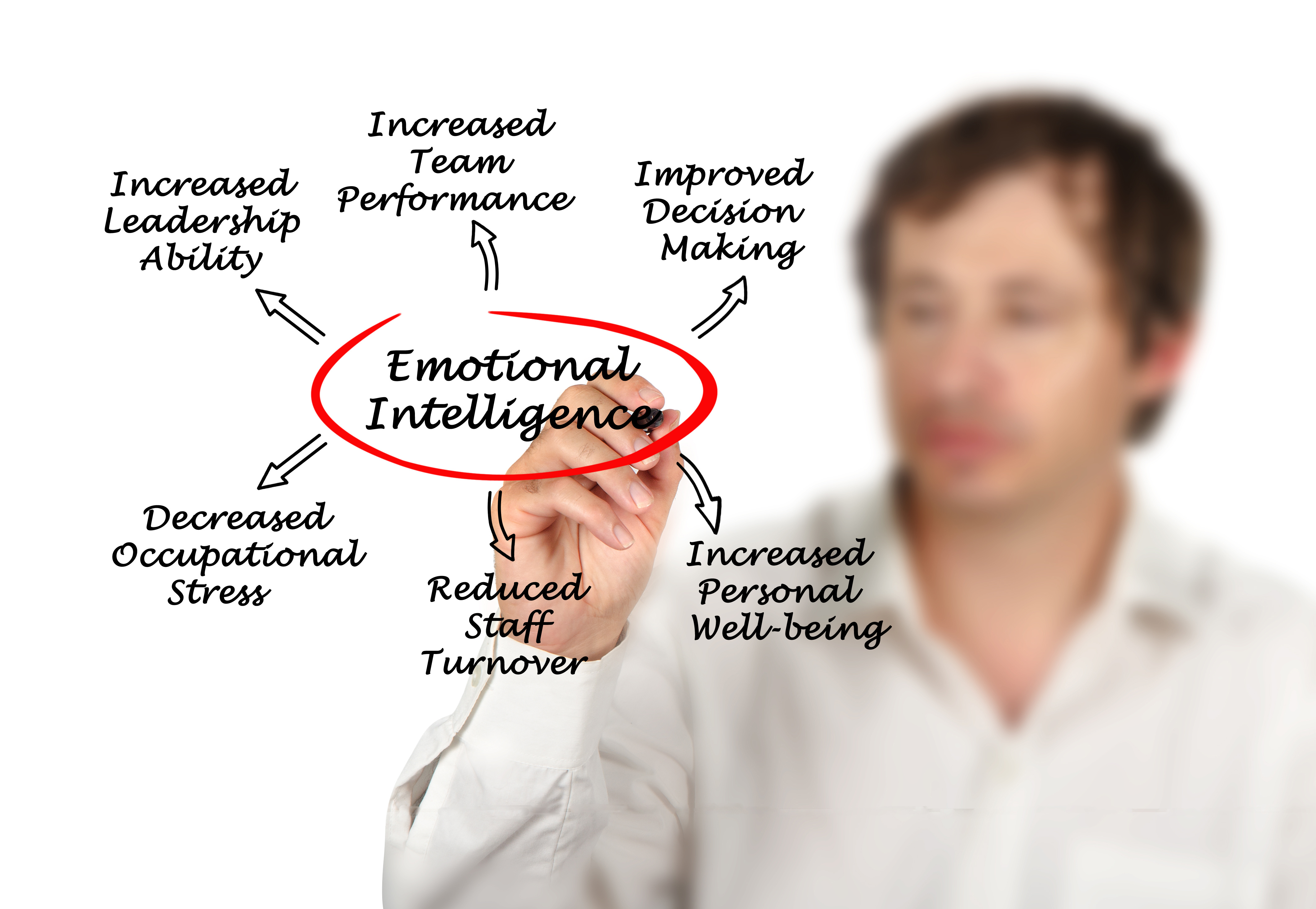 Interest in emotional intelligence (EI) has bloomed over the last few years and has become a standard concept in general and applied psychology, as well as in applied business settings. Private and public sectors have recognised the important role emotions play in our actions and, therefore, our performance. Although this interest or understanding of EI has recently been more pertinent, EI roots back to the concept of “social intelligence” that was first identified by Edward Thorndike in 1920. Additionally Peter Salovey and John Mayer were also instrumental to the development and understanding of EI with their publication of research in 1990, followed by an emergent growth of academic interest and popularity of EI when Daniel Goleman published his book titled Emotional Intelligence: Why it can matter more than IQ in 1996. Put simply, being emotional intelligent implies having emotional competence, emotional literacy and foresight about behaviour. Just some of the advantages of developing your EI are:

One of the most renowned success stories was a study conducted by the US Air Force (USAF) with staff retention. An EI psychometric test was used to select recruiters and it was found that the most successful scored higher in EI competencies of Assertiveness, Empathy, Happiness, and Emotional Self Awareness. The Air Force also found that by using EI to select recruiters they increased their ability to predict successful recruiters by nearly three-fold. The immediate saving of $3 million annually resulted in the Secretary of Defence ordering all branches of the armed forces to adopt this procedure in recruitment and selection.

Having worked in the region for 5 years now more and more companies are asking a lot of questions on how to create a culture of high performance and what can we do to improve the emotional intelligence of their leaders and employees. A few years back whilst working in the defence sector, I completed my MSc in Leadership and Management where I researched whether different levels of emotional intelligence affected the outcomes within a high performance culture and is it healthy for every team member to be high in all traits/facets of EI or is there a way of complementing low and high levels across a team or for different situations.

Unfortunately there was very little literature available on EI within this sector. My research set out to establish a Trait EI profile comparison of teams to investigate whether there was a difference of EI profiles and whether there was a notable difference with those who were younger or older and those who had different past experiences and training. The results of the research were extremely interesting and different for each level of the team. A number of reasons and evidence concluded with a mixture of age, demographics, experiences and time subjected in this type of environment.

The survey questionnaire was a published Trait EI Questionnaire (TEIQue), accessible from Dr K.V Petrides PhD (author) who is the Head of the Psychometric Department at University College London. It is a trait emotional self-efficacy test comprising of a 153 item inventory, covering 15 emotion-related facets, 4 factors (well-being, self-control, emotionality and sociability and an overall global trait EI score.

The experimental group consisted of seven teams  (approx 6 individuals per team which comprised of leaders who were younger and fast tracked due to more intense training, and others who had a mixture of ages and grew organically by merit and experience.

Means of each of the 15 facets, four factors and global score. 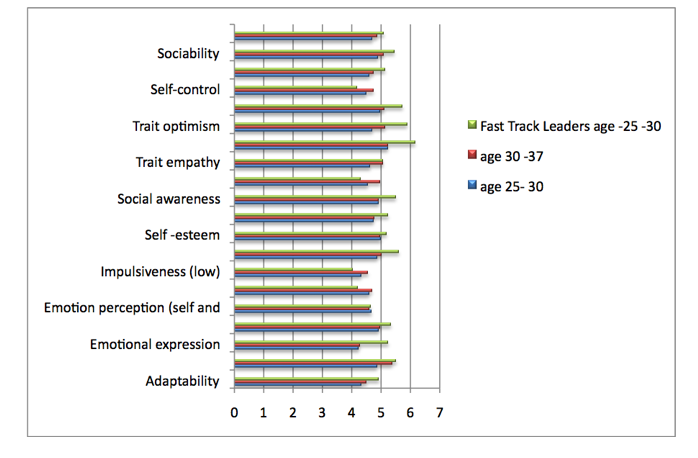 On initial examination of the different means across all three levels a few of the facets do stand out. Firstly, if we refer back to the adult sample domain of trait emotional intelligence, a high scorer in trait happiness views themselves as ‘cheerful and satisfied with their lives’. As you can see from the above chart, Fast track leaders (age range 25 – 30) who have higher means compared to (age range 25-30 ) and ( age range 30 to 37).  People with low scores tend to be disappointed with life, feel blue and be negative. Additionally, Fast track leaders (age range 25 – 30)  have a higher mean for the trait optimism facet (high scorers view themselves as ‘confident and likely to “look on the bright side” of life’) and although not highlighted, due to it not being a meaningful difference compared to other ranks, is self-esteem (high scorers view themselves as ‘successful and self-confident’). My immediate thoughts on this was undoubtedly fast track leaders tend to be very dynamic and positive in their outlook to life and indeed far more confident.  Previous research has also argued that leaders with these particular traits are able to “articulate in a compelling and exciting manner a vision of the future”.  On the other hand, a team member who is more pessimistic and does not look for a positive emotional atmosphere for themselves or indeed the whole team “can solely affect the whole group dynamic and lower its outcome.

Moreover, these three facets make up the ‘well-being factor’ and as shown in the chart, fast track leaders do have the highest mean score. The lower scorers across these three facets and factor tend to be pessimistic, negative and possibly undervalue themselves.  Although generally, from the means displayed, the fast track leaders tend to have higher means for each of the individual facets, however, interestingly (age range 25-30 ) were higher than (age range 30 -37 ) in self-esteem.

Emotion management (in others) is described as you are more than likely able to influence other people’s feelings if you are a high scorer. An example of this is motivating someone, calming them down or even consoling them and making someone feel better when they need it. In transformation leadership this may be described as inspiration motivation, or equally be a part of individual consideration, as it involves recognising strengths and weaknesses, but fundamentally being an ‘active listener’. In contrast, a low scorer is generally overwhelmed when they have to deal with people’s emotions and are less likely to enjoy social events or any form of networking. As displayed in the results, fast track leaders do have a meaningful higher mean, compared to the organic levels of the team. The explanation for this may be to do with the differences training of these leaders. It is substantially longer (one year) and much more based on being a leader from the start. The influencing skills of emotional management are a fundamental part of leadership training.

Interestingly (the age group 30 -37) of this sample had the highest mean for three of the facets and one of the factors. As it can be seen from the chart, the first of those facets to discuss is emotional regulation. This scale measures short, medium and long-term control of one’s own feelings and emotional state. As a result, it is argued that high scorers are able to switch and control unpleasant moods through their own personal insight and effort. In contrast, low scorers suffer emotion setbacks or seizures and have tendencies to be moody and irritable. This is normally due to being older and would have had more experience due to time in the job and being subjected to various situations and uncertainty which could enhance one’s coping strategies, easing the ability to control negative feelings. Furthermore this facet does correlate positively with adaptive coping strategies.

As the results indicate, the time, experience and age may justify why the low impulsiveness mean is also the highest for this range. This facet is all about ‘thinking before doing’. If you score high, you will reflect carefully before making a decision. Low scorers tend to be impetuous and have similar traits to children and want immediate gratification.

The final facet that has the highest mean from the older sample is stress management. Similarly to the description of emotional regulation, the control of coping mechanisms that a team member in the age group of 30 -37 is experienced which enables someone with a higher score to tackle stress more easily.

The overall comparison of each of the 15 facets, four factors and global trait score across the teams was extremely interesting. There were many suggested reasons why fast track leaders produced higher results for most facets, but which may of been a combination of demographics, previous experiences (university, gap years), and family backgrounds. Although these variables were not tested, these may be the answers to an individual’s well-being and that is why, overall, fast track leaders had a larger higher means in trait happiness, relationships, emotional expression and a significantly higher result in trait optimism.

Notably, it was (age group 30 -37) who had higher means in emotional regulation; it was suggested that it may be age related or due to their ability to appraise their own coping strategies from their past experiences. Similarly, this is closely related to why they also produced the highest means for low impulsiveness, as experience is possibly the foundation for reflective careful decision making, which balances out the over optimistic fast track leader within the team. Finally, as highlighted, it seemed that the results also demonstrated that ( age group 30-37) are better at stress management.

This research clearly identified that there are meaningful and significant differences of EI between team members which can complement each other to create a high performance team. The overall findings provide evidence for the practical implication of improving the EI of everyone and in every sector to improve performance and outcomes.  Although this research was unique, based on the defence sector, EI measurement of managers and teams within the private and public sectors may produce significant results that may affect or indeed improve high performance

As alluded to earlier, the financial savings of $3 million for US recruiters is something that may warrant an investigation in your own organisation. Moreover, other success stories on EI within the private sector were on experienced partners in a multinational consulting firm. These were assessed on the EI competencies and those who scored the median on 9 or more of the 20 competencies delivered $1.2 million more profit from their accounts than other partners  – a 139 percent incremental gain.

Steve is the Founder and Managing Director of Mission Command FZE. He has have over 15 years of extensive international experience in Execution and developing the competencies and behaviours of professionals in leadership roles and high performance teams. His work is always pragmatic, and contextualised to the clients needs and generally focused on how you can perform and think better under pressure. Mission Command’s approach is analytic, creative and energetic, which motivates and unlocks the potential in human performance. His excellent stakeholder management skills and the ability to think outside the box has led to repeat business, referrals and a strong customer satisfaction record.