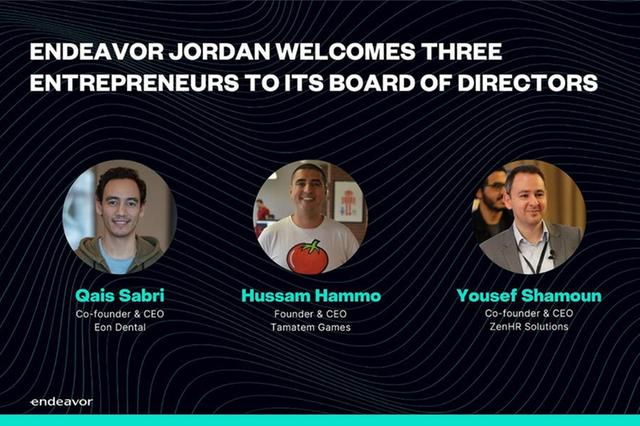 Endeavor Jordan announced today the appointment of three Endeavor Entrepreneurs to its board of directors. Yousef Shamoun (Co-founder and General Manager of ZenHR and Jawaker), Hussam Hammo (Founder and CEO of Tamatem Games), and Qais Sabri (Co-founder and CEO of EON Dental) were selected as Endeavor Entrepreneurs in 2010, 2017, and 2019 respectively, and are now serving as board members for the local chapter of Endeavor.

The appointment of the entrepreneurs to the local board spurs from Endeavor’s mission as a leading global community of, by, and for high-impact entrepreneurs, and the organization’s core belief in the transformational impact of entrepreneurs on economies.

Endeavor Jordan’s board of directors is composed of top business leaders and organizations who are actively involved in supporting the organization’s efforts to advance the local entrepreneurial ecosystem and therefore the local economy. A full list of the board members may be found here.

Commenting on the appointment, Nadia Al Saeed, Chairwoman of the Board said, “Having Endeavor Entrepreneurs on the board will take Endeavor Jordan to the next level. We are certain that they will bring tremendous value to our entrepreneurs, drawing on very relevant practical experiences. It will also further enhance the strong role that Endeavor Jordan has been playing to support the entrepreneurial system as a whole. I look forward to working closely with them on the board and strategy level.”

Endeavor is the world’s leading community of high-impact entrepreneurs. Founded in 1997, Endeavor is a global organization with a mission to unlock the transformational power of entrepreneurship by selecting, supporting, and investing in the world’s top founders. Today, Endeavor’s network spans nearly 40 countries and supports more than 2,000 entrepreneurs, whose companies generate combined revenues of over $28 billion US, have created more than 3.9 million jobs, and, in 2020, raised over $4 billion US in capital. Endeavor’s unique entrepreneur-first model and network of trust provide a platform for founders to dream big, scale up, and pay it forward to the next generation of entrepreneurs.