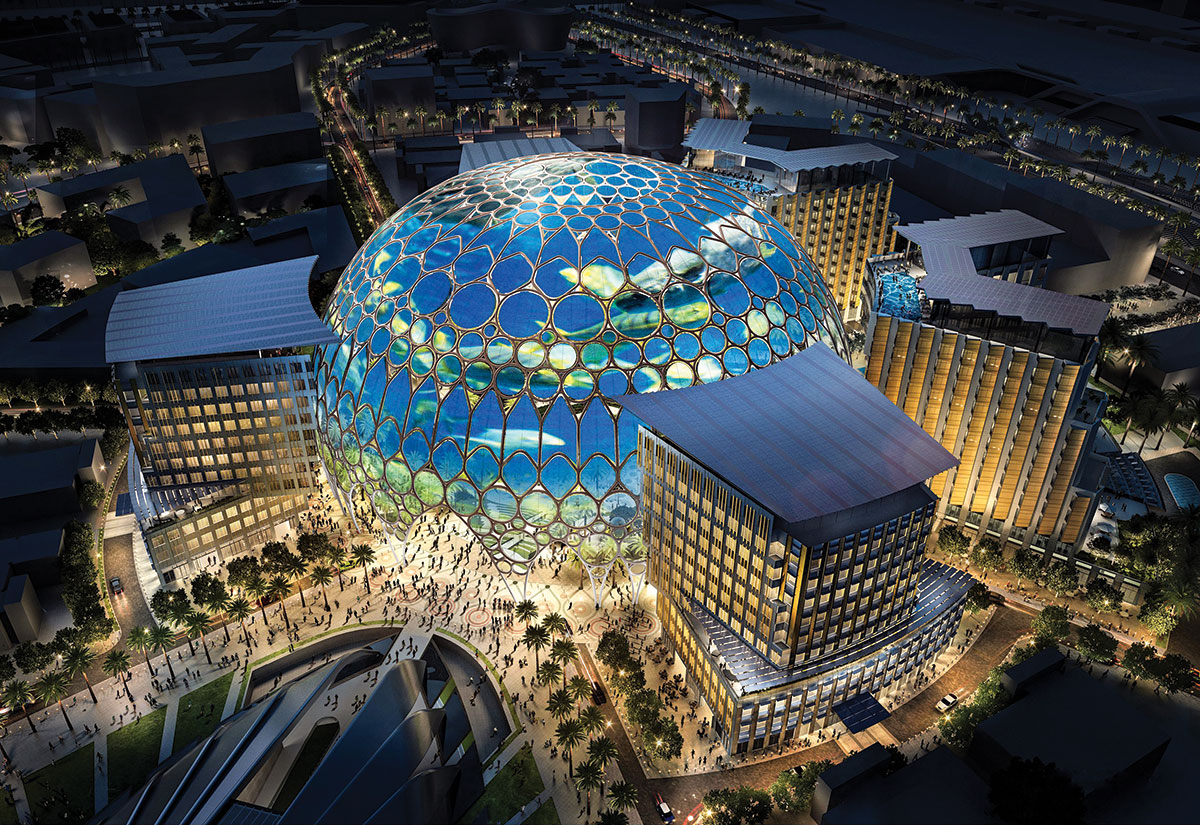 Cities and their inhabitants are locked in a race against time – that was the message from Expo 2020 Dubai’s Urban & Rural Development Week, which concluded with the announcement that more than 120 of Expo 2020’s permanent buildings have been LEED certified.

And with 70 per cent of the world’s population – a staggering 6.6 billion people – predicted to be living in urban areas by 2050, the urgency for smart thinking on how to stop cities from rapidly becoming unliveable and unsustainable is greater than ever.

The ecological, social, mobility and economic challenges that cast their shadows over our built environment formed the core topics of Urban & Rural Development Week, the third of 10 Theme Weeks being held across the six months of Expo 2020 as part of the Programme for People and Planet.

Launched on International World Cities Day (31 October), the week brought together experts, decision-makers, business leaders and grassroots activists from across the world for a series of conferences, panel discussions and workshops.

Run in collaboration with Australia, India, Singapore and Slovenia, the week concluded with the announcement that more than 120 of Expo 2020’s permanent buildings had been granted the globally recognised Leadership in Energy and Environmental Design (LEED) certification.

Another major milestone was the unveiling by the United Nations on 3 October of the Last Mile Delivery Roadmap, a blueprint for an inclusive, localised approach to make informal settlements safe and sustainable.

Other topics covered during the week included a special Women’s World Majlis that reimagined how cities and villages would look had they been designed by women; an exploration of how to reinvent world-class cities as social melting pots; and discussions on the importance of connectivity and mobility to make communities more equitable and sustainable, as well as the importance of preserving green spaces.

The transformation of the Expo 2020 site into District 2020, a human-centric sustainable smart city that will repurpose 80 per cent of the permanent structures on the site, was held up as an example of how cities of the future can be designed to improve the well-being of their inhabitants.

The ‘15-minute’ model adopted by District 2020 reflected this human-centric approach, Nadimeh Mehra, Vice President, District 2020 Transition Unit, told the “Smarter than Smart Cities” Majlis. “It’s a truly mixed-use development where people can work, live and explore, with everything less than 15-minutes away.”

The week showcased alternatives to the use of CO2-heavy concrete as a construction material, including using mushrooms in the creation of floor and wall tiles – a technology on display at the Netherlands Pavilion – and a German innovation that makes compostable and recycled building materials by mixing broken concrete or bricks with fresh clay, bound together with hemp and vegetable matter.

Singapore shared its approach to greater sustainability at an event based on making cities more nature-centric. Hundreds of edible urban gardens are making the island state less dependent on imported food, while strict planning laws ensure that the improvement of green spaces is integrated into every aspect of urban development.

Creating urban resilience, the theme of the World Cities Day event, focused on the challenge presented by the statistic that by 2025 more than half the world’s population will live in mega-cities. Professor Greg Clark, Group Advisor, Future Cities and New Industries, HSBC, told participants that making these cities work would require “institutions that are going to be incredibly flexible. We have to build the bond of trust between people and place. There needs to be a sense of belonging and a sense of welcome.”

Urban & Rural Development Week also heard from Sameh Wahba, Global Director, Urban, Disaster Risk Management, Resilience and Land Global Practice, World Bank, who urged greater inclusion of people in urban planning: “Cities will only be as good as the authorising environment that exists for them within a nation. If a city in a context of a highly centralised state has no responsibilities, has no financial resources, has no prerogatives and mandates, then obviously their actions will be inevitably limited.”

Unveiling plans for Last Mile Delivery Roadmap,Kerstin Sommer, Programme Manager, Participatory Slum Upgrading Programme, UN-Habitat, noted that slums were the only way that many people could afford to live in proximity to employment opportunities. Sommer called for inclusive frameworks and a shift towards city-wide approaches to integrating slums and informal settlements.

Another theme running through the week was the need to slow the drift to cities by ensuring rural areas are attractive places to live and work, with digitalisation and connectivity being singled out as crucial to this process. Dubravka Šuica, Vice-President, European Commission, and European Commissioner for Democracy and Demography, said: “Our rural areas are a hive of activity and a source of tremendous vitality and renewal. We must embrace and enhance their attractive, vibrant and dynamic character.”

Expo 2020’s 10 Theme Weeks offer a platform for the exchange of inspiring new perspectives that tackle the greatest challenges and opportunities of our time, including climate, connectivity, the future of human health and more. The focus of the next Theme Week is Tolerance & Inclusivity, which will be held from 14-20 November.