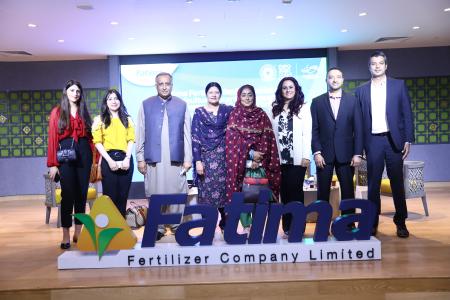 Being a market leader within Pakistan’s agriculture industry, Fatima Fertilizer has always strived to be at the forefront of supporting Pakistani farmers, especially the female farmers.

Historically, the company has organized innumerable public campaigns and events recognizing the exceptional bravery and resilience of Pakistani farmers and their important role in protecting national food security.

A recent example of this commitment was marked by Sarsabz – the flagship brand of Fatima Fertilizer, hosting a special panel discussion at the Pakistan Pavilion in Expo 2020 Dubai to celebrate three exceptionally inspiring female farmers from Pakistan and share their inspirational stories with the World.

The guest panellists included Rabia Sultan, a progressive farmer from Muzaffargarh who defied all odds in a male-dominated profession, Nazo Darejo, a brave woman from Sindh who sacrificed a great deal to protect the piece of land she called home; and Azra Mehmood Sheikh, a progressive farmer from Bahawalpur who actively advocates about the hardships faced by farmers in South Punjab.

During the discussion, the role of Pakistani women associated with agriculture was extensively highlighted in context to the core issues and challenges faced by them.

The first guest speaker, Rabia Sultan, apprised the audience with her inspirational story when she aspired to be a competent farmer just like her father. She used Fatima Fertilizer’s Sarsabz Nitrophos (NP) and Sarsabz CAN (Gawara) on her cotton crops to achieve a staggering 61 mounds per acre of yield. Throughout her journey, Sarsabz Fertilizers remained a trusted partner for her and a leading source of guidance. The Punjab government also recognised her success by rewarding her achievement.

The second guest speaker, Nazo Darejo, recollected moments from her brave solo encounters while defending her piece of land. These were not merely emotional adventures related to love for the land but projected the bold character of Pakistani women in agriculture. Sarsabz produced a special web series called ‘Kissan Kahani’ to promote Nazo’s inspirational story to a wide online audience. Nazo appreciated the relentless support from Fatima Fertilizer in highlighting her story in the spirit of elevating the image of Pakistani rural women in society. Lastly, the third guest speaker, Azra Mehmood Sheikh, talked about balancing her work and family life and the role of women and media to transform Pakistan’s agriculture sector.

Mr. Khalid Khokhar, President of Pakistan Kissan Ittehad, also attended the event and talked about the required government support to enhance the role of Pakistani women in agriculture. He also recognized their participation being most crucial for inclusive growth.

While speaking about this event, Rabel Sadozai, National Marketing Manager of Fatima Fertilizer, said, “The stereotype that women in rural societies are not playing a significant economic role is gradually breaking. The current contribution of women in Pakistan’s agriculture sector is commendable. According to Pakistan Bureau of Statistics, 19% of Pakistan’s GDP is dependent on agricultural while 22 million women are associated with this sector. At Fatima Fertilizer, we acknowledge the important role of women in agriculture and are constantly striving to unleash Pakistan’s agriculture potential through innovation and inclusion.”

Fatima Fertilizer has organized a range of activities at the Pakistan Pavilion in Expo 2020 Dubai to promote awareness about Pakistan’s agriculture sector and its unique rural culture.

The company has been actively promoting several farmer-centric initiatives during its ongoing engagements, since the start of Expo 2020 Dubai. These include hosting the Urban women empowerment week, celebrating Pakistan’s Kissan Day in December 2021, and participating for three days in the Agriculture Week and Climate Week.