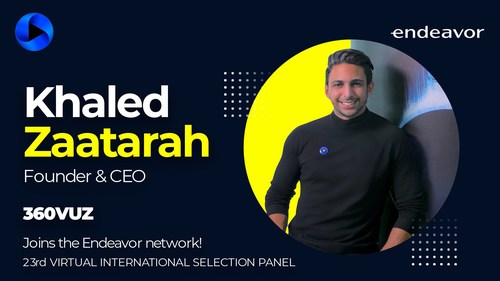 360 VUZ, the leading immersive video mobile app building on the Metaverse, announced today the selection of its Founder Khaled Zaatarah as an Endeavor Entrepreneur as a result of the 23rd Virtual International Selection Panel (vISP). The selection of Zaatarah into the global network will play a major role in scaling 360 VUZ’s business and network.

Held either virtually or in person, the Endeavor ISP is the final phase of a multi-step rigorous selection process, where candidates pitch their companies to top international business leaders and investors from the Endeavor network, making those obtaining a unanimous vote officially Endeavor Entrepreneurs.

Khaled Zaatarah, 360 VUZ Founder and Chief Executive Officer, said: “Being selected as an Endeavor Entrepreneur is a badge of honor for me personally and for 360 VUZ. There is no doubt that this step will open the doors for us to support other networks, entrepreneurs and startups, scale up our business, drive economic growth, catapult job creation, and exchange ideas with like-minded entrepreneurs in the world.”

Historically, fewer than 5% of candidates who enter the initial selection process reach the international selection panel stage, and only those that are unanimously approved by panel experts are selected to be Endeavor Entrepreneurs. The primary objective of Endeavor is to drive economic growth and job creation by selecting, mentoring, and accelerating the best high-impact entrepreneurs from across the planet. “High-impact” means those entrepreneurs that are thinking big – those with innovative business models that are seeking to scale up their organization and transform their sector or market. In doing so, these people can support the wider community both by creating job opportunities and inspiring others.

As part of Endeavor’s network, 360 VUZ will gain access to comprehensive, strategic, global support services, including introductions to international business mentors, capital, investors, and volunteers from Fortune 500 consulting firms for its hyper-growth and international expansion.

360 VUZ was founded in 2017 by Jordanian entrepreneur Khaled Zaatarah. 360 VUZ has offices in Dubai, UAE, Los Angeles, California, Amman, Jordan, and Riyadh, Saudi Arabia, counts a team of more than 45 people with specialties in various types of innovation and product development expertise across multiple technology sectors.