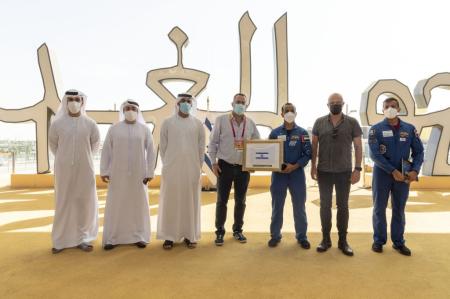 His Excellency Salem Humaid AlMarri, Director General, Mohammed Bin Rashid Space Centre (MBRSC) led a team from the Center during a recent visit to Expo Dubai 2020, where he met with Her Excellency Reem Al Hashimy, Minister of State for International Cooperation and Director General of ongoing global event to discuss how space innovations and technologies can be used for the good of humanity.

H.E Al Hashimy and H.E AlMarri were joined by UAE astronauts Hazzaa AlMansoori and Sultan AlNeyadi as they discussed the UAE’s space vision as well as important opportunities and challenges confronting the sector regionally and internationally.

His Excellency Salem Humaid AlMarri, Director General, Mohammed Bin Rashid Space Centre (MBRSC): “as a nation with a nascent space exploration program, the UAE is keen to foster greater collaboration with other nations who are underrepresented in the space industry, as well encourage more contributions from and better representation for women in space programs across the world. With close to 200 countries participating, Expo Dubai 2020 is the perfect platform for us to connect with other nations with whom we can collaborate to achieve the UAE’s vision and its aspirations to become a major contributor to the future of space exploration”.

Since becoming the first nation in the Arab world to embark on a space program, the UAE has actively encouraged other non-space faring nations not just from the region but across the world to take their own first leap into space. It also recently launched a payload hosting program, allowing countries which do not have the facilities to be able to launch their own satellites into space.

The Mohammed Bin Rashid Space Centre, founded in 2006, is home to the UAE National Space Programme. The Centre builds and operates earth observation satellites, offering imaging and data analysis services to clients around the world. It has launched the DubaiSat-1, DubaiSat-2 and the KhalifaSat, which was developed 100% in the UAE by a team of highly qualified Emirati engineers. The Centre also launched the Emirates Mars Mission “Hope Probe”, which became the first Arab interplanetary mission to reach the Martian orbit on 9 February 2021. The Hope Probe is currently gathering key scientific data about Mars’ atmosphere.

Recently, the Centre announced the launch of the Emirates Lunar Mission, the first Emirati and Arab mission to explore the Moon and plans to develop MBZ-SAT, the most advanced commercial satellite in the region in the field of high-resolution satellite imagery. Furthermore, MBRSC hosted the 72nd edition of the International Astronautical Congress (IAC) 2021, the world’s premier space event, in Dubai. The UAE has become the first Arab nation to host the IAC since its establishment in 1950. The Centre is also responsible for the UAE Astronaut Programme, which saw the launch of Hazzaa AlMansoori, the first Emirati Astronaut, to the International Space Station on a scientific mission in 2019, and the development of the Mars 2117 Programme to build a human colony on Mars.