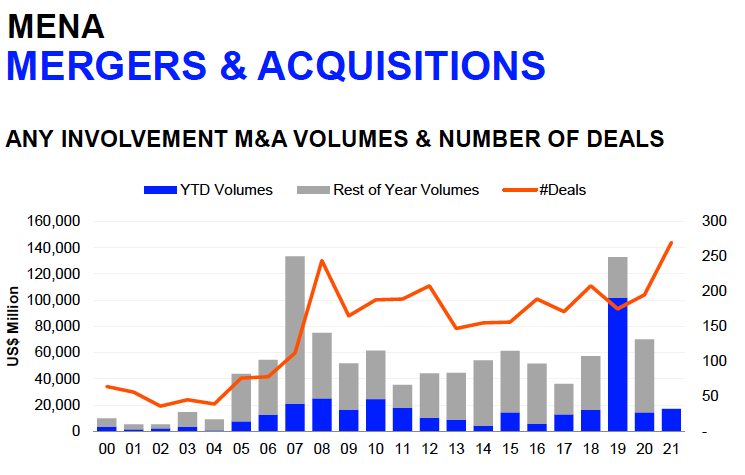 Advisory fees earned from completed M&A transactions generated US$20.4 million, down 74% representing the second-lowest total in the last ten years. Equity capital markets underwriting fees fell by more than half compared to 2020, to US$7 million, the lowest total since 2011. Syndicated lending fees increased 76% to US$109.2 million, a three-year high in fees and the thirdhighest total since our records began in 2000. Bond underwriting fees also experienced an increase with US$81.3 million in fees, a 64% increase from the same period in 2020.

Governments/agencies and financials accounted for 87% of total fees this quarter in MENA with 59% and 28% fees recorded, respectively. HSBC Holdings PLC earned the most investment banking fees in the region during the first quarter of 2021, a total of US$22.7 million or a 10.4% share of the total fee pool.

Announced M&A transactions with any MENA involvement reach US$17.1 billion during the first three months of 2021, a 19% increase in value compared to the same period in 2020 and a record number of deals with 270, the highest start to a quarter. Target M&A increased 55% from last year to US$12.7 billion this quarter, the second-highest on record with only 2019 higher with Saudi Aramco and Saudi Basic Industries Corp deal of US$69.1 billion making up a large proportion. Outbound M&A delivered a positive start to the quarter representing US$3.9 billion in value and already overtaking 2020 full-year volumes. Domestic M&A experienced a 73% increase from last year with US$9.4 billion in deal value.

The largest deal of the quarter in the MENA region was the acquisition of BP PLC-Block 61 based in Oman from Pttep Mena Ltd for US$2.59 billion. Egypt was the most targeted nation with US$3 Billion In M&A activity, closely followed by Oman and Qatar. JP Morgan topped the any MENA M&A involvement financial advisor league table during the first quarter of 2021, advising on US$5.1 billion worth of deals and hold a 30% market share. In second place was Rothschild, while Citi take third spot.

MENA debt issuance totalled US$34.8 billion during the first quarter of 2021, up 61% from the same period in 2020 and the best start to a year since our record began in 1980. 48% of this total came from Investment grade issuance which totalled US$17 billion, the best start to a year since our records began in 1980. Saudi Arabia and the United Arab Emirates were the most active issuer nations with US$12.3 billion and 7.5 billion in bond proceeds, respectively. Saudi Arabia’s bond sale in January this year of US$4.9 billion was the largest MENA bond sale of the quarter. Standard Chartered took the top spot in the MENA DCM league table during Q1 2021 with US$4.5 billion of related proceeds, or a 13% market share.