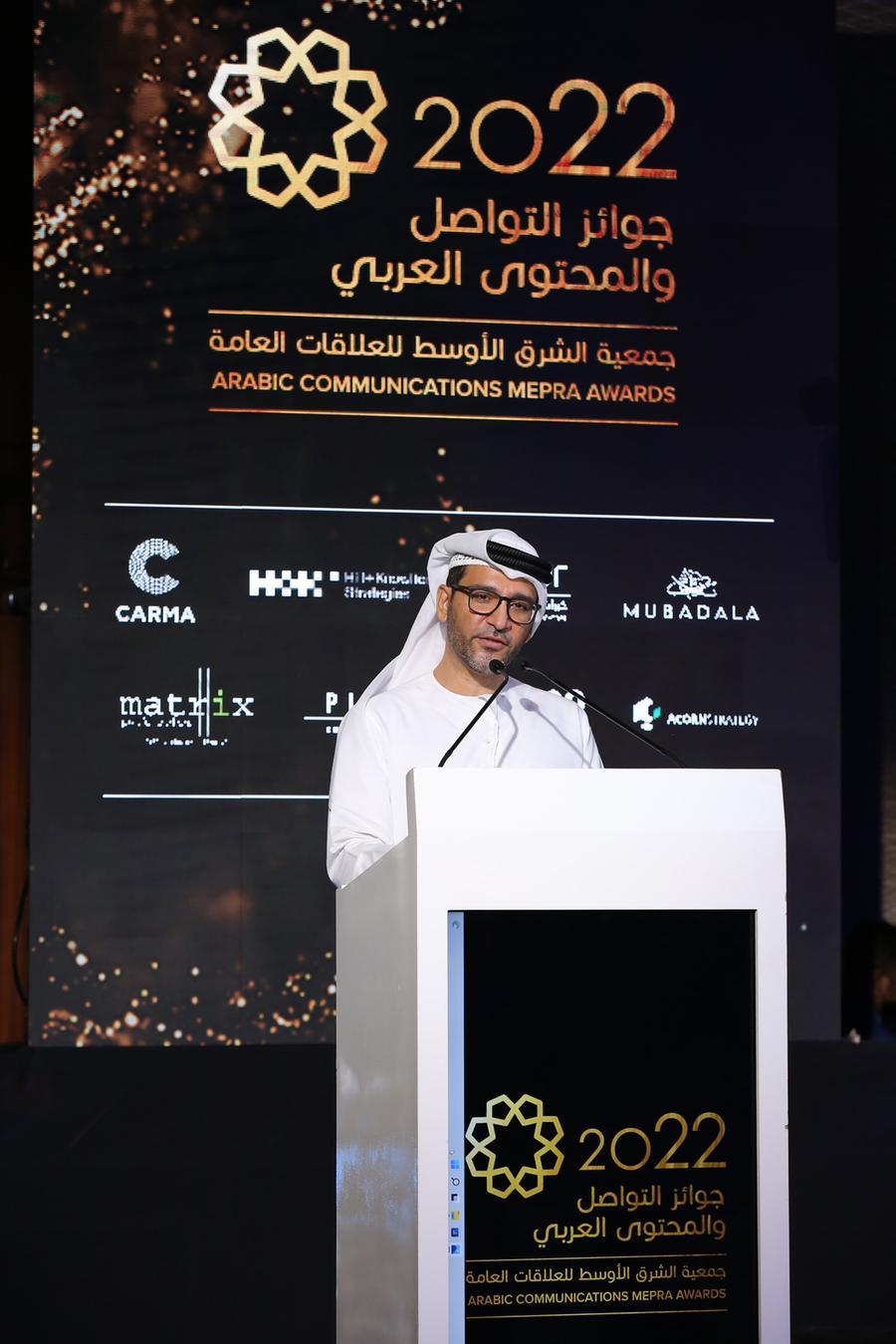 Attended by over 150 guests, the inaugural Arabic Communications MEPRA Awards was a welcome addition to MEPRA’s awards scheme having attracted over 20 public relations agencies and in-house communication teams jostling for top honours in 22 categories.

The Arabic MEPRA Awards – as envisioned by Taryam Al Subaihi, Chairperson, MEPRA – included a special focus on the most notable Arabic-centred communication campaigns conceptualised and executed in response to COVID-19. Apart from being submitted in Arabic, the campaigns must also have been published and delivered in Arabic to qualify for entry.

The Arabic Communications MEPRA Awards Team of the Year went to Mubadala Ambassador Program, for their outstanding achievements, performance and demonstration of excellence in the field of communications over the last 12 months.

The Outstanding Young Communicator of the Year award went to May Obeid from FOUR Communications in recognition for her exemplary achievements and overall performance as a promising young communicator who is making a valuable contribution to her organisation as well as exhibiting enormous potential as a future leader.

“It’s indeed a historic moment not just for MEPRA but for the entire Middle East communication industry and most importantly, Arab-speaking PR practitioners. This is the first time that MEPRA is recognising and honouring Arabic communication excellence – a long overdue fete they so rightly deserve. Arabic communication has and continues to be instrumental in creating synergies between institutions and their target audiences in a language they understand,” said Taryam.

The Best Use of Media Relations award went to ASDA’A BCW while Weber Shandwick scooped the Best Use of Video award for their creative approach and strategic use of video material in their PR campaign.

In the Student and Academia category, Outstanding Student Campaign, Mariam Eldaly from Middlesex University emerged as the winner in a hotly contested race. The category seeks to recognise excellence in a communications campaign proposal developed by a currently enrolled student in response to a client brief provided by MEPRA.

In his inspiring keynote, Rashid Al Awadhi, vice chairperson MEPRA and CEO, New Media Academy commended all the winners and nominees for their dedication to Arabic communications and encouraged them to use their skills and knowledge to deliver Arabic PR campaigns that impact society in a positive way.

The event was also graced by Maryam Bin Fahad, one of the UAE’s youngest ambitious leaders in the Emirate media. Her passion for media is reflected in her numerous achievements including her recent appointment as Media Advisor to the Minister of State and the National Media Council for the UAE. Others included Ahmed Al Marzooqui, a UAE-based finance content creator and Hamad Al Harthi, one of UAE’s youngest entrepreneurs, content creators and Emirati public speakers.

The premier Arabic Communications Awards scheme was mooted with the sole aim of shining a spotlight on impactful and transformative Arabic content while highlighting the importance of the Arabic language in the communications industry within the Middle East.

This, according to MEPRA, is in line with its objective to achieve its vision of being the unique voice that represents the public relations and communication profession in the Middle East and its mission to raise awareness and build a holistic understanding of public relations in the region.