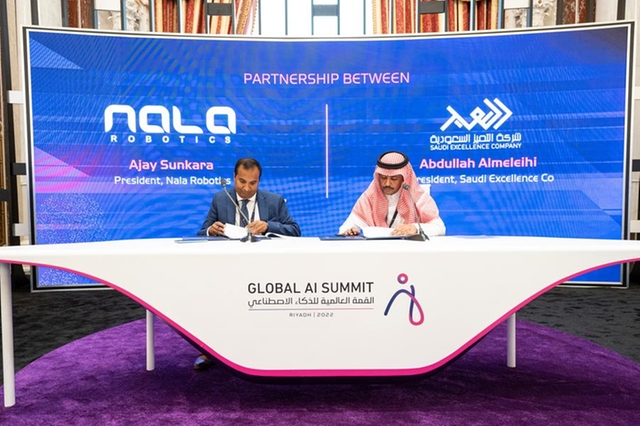 Nala Robotics, a leading artificial intelligence technology company in the United States, signed a memorandum of understanding with the Saudi Excellence Company, a provider of AI and financial technology services, to explore ways to bring cutting-edge AI Robotic services into Saudi Market.

The announcement came at the ongoing Global AI Summit, held under the patronage of His Royal Highness Crown Prince Mohammed Bin Salman bin Abdulaziz Al Saud, at King Abdulaziz Conference Center in Riyadh from the 13th through the 15th of September.

According to the MoU, Nala Robotics would provide AI-powered robotics software and hardware to Saudi food producers so they can make higher quality, more affordable edibles faster and more efficiently.

Nala Robotics will also explore the possibility of starting a local research and development center to develop robotics-related AI and machine learning for Saudi Middle Eastern cuisine, starting first with the Shawarma Robotic Chef and eventually with the world-famous Saudi Kabsa dish.

“It’s a memorable event for Nala Robotics Inc. to sign this MoU with Saudi Excellence Company, a pioneer in bringing latest technology to Saudi Arabia,” said Balaji Koneru, General Manager – Asia Pacific at Nala Robotics. “This will help us cater to existing international and new clients in the Kingdom.”

“Nala Robotics,” Koneru added, “is committed to helping the Saudi food industry meet the Saudi Vision 2030 objective of adapting the latest AI technology, given the Kingdom’s importance as an international trade hub that connects Asia, Europe and Africa. The partnership with the Saudi Excellence Company will help Nala Robotics maximize its strategic geographic position and grow our business in the Middle East and North Africa.”

Omar Mian, Chief Innovation Advisor at the Saudi Excellence Company, created first Shopatainment marketplace in the food tech industry, where users can order food from a video streaming or gaming platform. He is currently involved in technology, artificial intelligence, robotics and blockchain gaming, representing many of the world’s leading high-tech companies in the Kingdom, managing and fulfilling the demand fueled by a predominantly young population.

The Saudi Excellence Company is a subsidiary of Al-Ramez International Group, which operates in various sectors, such as general trading, contracting, design consultancy, advertising, and publicity.