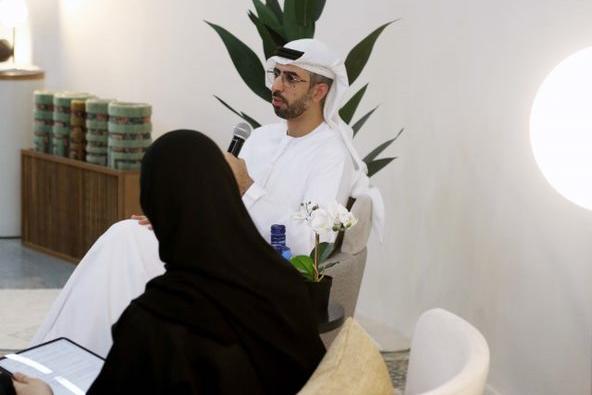 His Excellency Omar Sultan Al Olama, Minister of State for Artificial Intelligence, Digital Economy and Remote Work Applications stated that the importance of investing in talents and resources to implement Ai technologies in innovating solutions and systems aiding all fields to enhance UAE’s place and elevating it, to be one of the most advanced countries around the world.

H.E. Omar Sultan Al Olama commented: “Implementing Ai effective solutions is apparent in many vital sectors in the UAE as it’s affecting positively the successful experience in the AI enhanced traffic systems in Dubai to avoid traffic jams and halving its effects, in order to improve systems quality and leveraging technology in making mobility easier for the citizens.

H.E. Omar Sultan Al Olama commented: “If you think about the fundamentals of the Metaverse, it’s all about scale. For example, the biggest concert in the world attracted 1 million people, while in the Metaverse a Travis Scott concert, which is considered the biggest, yet, attracted 50 million people. That affirms the AI’s ability in expanding services and content beyond physical boundaries. Through Metaverse, people are able to attract a billion person to buy products without having to deliver it to billion people, without having to think about the logistics, or issues related to it.

H.E. further added: “In essence, the Metaverse is a scale which gives the content to a wider group of people in fields, including video games, smart applications, websites, startups, conglomerates, and online shopping to sell more without having to produce and pollute more; the best way to do this is through the metaverse. For this virtual world to be used by community and governments to discover new aspects and dimensions.

H.E. Omar Sultan Al Olama emphasized the positive aspects in the future of AI with the presence of the highest unicorn companies in the region, highest number of success stories that exists, as well as the biggest and highest growth in startups. LinkedIn published a report, early this year, highlighting the effects of global talent indices. The UAE ranked first globally in terms of tech talent flow per capita. Adding that the UAE ranked fifth globally in the tech talent flow in general; fifth to the US, UK, Canada, and France, ahead of Singapore and China. It proves that where good people are being supported, great things happen.

H.E. affirms that building capabilities and enhancing talents within agile government, with the recent announcements of virtual assets and crypto, in a short time, the UAE has become one of the leaders in the crypto space, it’s because of the young mindset that our leaders have instilled as a culture and mindset, that encourages us want to explore, try and ensure that the next generation has a bright future.

H.E. Omar Sultan Al Olama said: “The online learning nowadays is a great opportunity to become a top coder and gain skills in vital sectors. Discussing your visions and thoughts with successful people and experts ensures building a strong community. So, we wanted to create a community to evaluate their skills and get a valid feedback on how to progress and improve, by meeting with others who succeeded in starting a company, work together on projects and profit from it. Our mission is to create the highest ranked coders, who have the best abilities, qualities and attributes in the country.”

H.E. concluded that: “Coding is about critical thinking, so if you’re a good coder, even if you don’t practice, you’ll be a great critical thinker. The UAE welcomes everyone to try and seize the opportunity to implement Ai and knowledge in social life whether it’s critical thinking or technical elements to create a strong community that can and will shape a smart future.

The Fatima Bint Mohamed Bin Zayed Initiative was founded in 2010. The initiative and its two social enterprises were established to empower communities through a sustainable model. FBMI focuses on projects in healthcare, education, numerous economic reforms; and provides sustainable employment opportunities as well as critical social services. About 70% of FBMI employees are women & widows who work from home. More recently in 2020, FBMI joined the fight against polio with unprecedented and unrestricted access across Afghanistan.

The Anwar Gargash Diplomatic Academy (AGDA) is a globally recognised diplomatic centre of excellence in Abu Dhabi, UAE. It delivers accredited academic programmes and high-impact executive training to develop future diplomats, as well as the government and business leaders of tomorrow. AGDA brings together an intellectual community from the world of diplomacy, academia and research. As a respected and evolving regional think tank, AGDA produces research that advances knowledge and capabilities relevant to the UAE’s foreign policy objectives. The Academy is a producer of leading resources, including indices and publications.