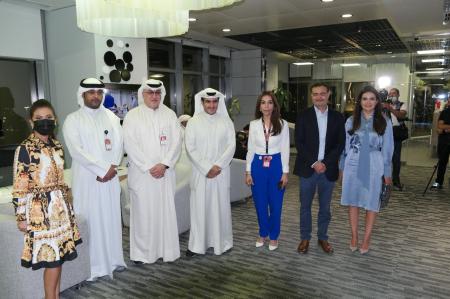 For the eighth year in a row, Ooredoo Telecom, the first to introduce innovative digital services in Kuwait, achieves another milestone that adds to the company’s records in the world of communications and modern up-to-date devices by launching the biggest launch event to give customers the opportunity to obtain exclusive plans at competitive prices with the latest all-new iPhone13 series consisting of: iPhone13, iPhone13 Mini, iPhone13 Pro and iPhone13 Pro Max. These four new iPhone 13 models were launched this year with an upgraded A15 Bionic Chip which enables all customers to enjoy the most powerful performance not available in any other smartphone. From the first day of the event inauguration last Thursday, October 14th 2021, until its extension throughout the weekend at the Ooredoo Tower in the heart of Kuwait City, the event witnessed a large crowd of customers and iPhone junkies, whose numbers exceeded 3000 customers.

The Biggest iPhone 13 Launch Event in the Country

As Ooredoo Kuwait is committed to pioneering innovation and creativity, and providing revolutionary products and services to its customers, here it is standing once again and overcome its rivals demonstrating its ability to meet the changing needs and demands of the market and customers as well as enriching the customer’s digital experience.

At the heart of Kuwait City, Ooredoo Tower welcomed hundreds of customers and technology and iPhone junkies, who were keen to be the first to attend this biggest event from six pm until midnight to take advantage of the exclusive and strongest offer in the country at competitive prices, unique benefits and free valuable gifts. During the launch event, Ooredoo Kuwait announced its special offer on the iPhone 13, iPhone 13 Mini, iPhone 13 Pro and iPhone 13 Pro Max. Hence, these limited offers

The Participation of Leading Companies

The annual event also featured a wide range of distinctive entertainment activities that achieved the highest standards and exceeded the customers’ expectations, and thus ensured their ultimate satisfaction. Last but not least, all customers were treated with an outstanding experiences that included an exclusive set of raffles and valuable prizes, as well as the participation of many prestigious companies in the country including; the National Bank of Kuwait (NBK), Oula Gas Station, Falcon company, owned by New Market and the leader in Kuwait and the region in providing the latest services and technology related to drones, Cavaraty, a store that sells high quality mobile products and accessories, V-Thru, Soor Fuel Marketing (Alfa) and Maidan clinic.

Further, a number of well-known restaurants and cafes that offer the best tastes participated where customers enjoyed the true meaning of authentic hospitality and tasted the most delicious cuisines, coffee and beverages.

The event was crowned by a series of competitions to interact with the crowd and award the attendees including: “Answer & Win” games organized by Ooredoo Kuwait on the first day of the event, along with the opportunity to enter a raffle for the grand prize, the Mercedes CLA, in which customers have to send “YES” to 1010 to enter the draw and get a chance to win. Ooredoo has also launched its competition in which the attendees were requested to “Guess the number of iPhone 13 boxes inside the Mercedes CLA for a chance to win”, the winner was announced in the same day and were rewarded with a valuable prize.

The National Bank of Kuwait (NBK)

Ooredoo Kuwait and the National Bank of Kuwait (NBK), the leading bank in Kuwait and the region, celebrated a new strategic partnership agreement, under which Ooredoo offered NBK Private Banking Customers a set of privileges for getting the new iPhone 13 in Ooredoo’s launch event of the all-new iPhone13 range.

According to the agreement, Ooredoo Kuwait treated NBK Thahabi and Privilege Banking Customers with exclusive offers including the priority in getting the new Apple iPhone 13 when presenting NBK ATM Card, in addition to the privilege access to the company’s VIP lounge during the event.

Seeking to provide the customers of the National Bank of Kuwait (NBK) with exclusive offers and rewards that suit their changing needs and demands, Ooredoo offers them an elevated digital experience using eligible NBK Debit Cards. According to the offers, NBK Customers from the holders of eligible cards can purchase the desired iPhone 13 at exclusive prices starting from KWD 25 with launch freebies including; complimentary 500GB Data SIM (Free for 24 or 36 Month Contract), complimentary cover or MagSafe Wallet, 4 Cameras (1 Arlo Pro 2 + 2 Add-ons) and AirPods 2.

Ooredoo has also been keen to offer special and exclusive offers to al Nokhba customers on the all-new iPhone 13, starting from KWD 50 per month, including valuable gifts and unique benefits.

On Friday, October 8th 2021, Ooredoo Kuwait proudly announced its partnership with V-Thru for the iPhone 13 launch event. V-Thru is an application whose number of users exceeded 250,000 users whom can order and receive their order without leaving their car, making the driving and ordering experience smoother and more enjoyable. During the first day of the launch event, all users of the V-Thru application were able to order and collect their iPhone 13 without the need leave their car. Hence, 10 V-Thru restaurants and cafes participated in the launch event and for three consecutive days these are: Toby’s Estate, Doh, Thinnies, Urbn grill, Froyo, Chocolatness, Moo, Napoli Napolita, Botata and Voyage.

In its part, Ooredoo rewarded V-Thru users with 500 mystery bags and 3 “Golden Tickets” that can then be redeemed at the Ooredoo Tower for a brand new iPhone 13 on October 15th and 16th 2021. Thus, V-Thru organized a competition broadcasted via social media channels, Instagram in specific, in which customers had to order the complementary mystery-bag giveaway through V-Thru application, and the application directed them to drive to the event location. At the event location, customers went through a fun drive-thru experience greeted by the V-Thru team; getting giveaways from Ooredoo Kuwait.

It is worth noting that V-Thru proved its efficient capability at the launch event, as a number of its restaurants participated in the event throughout the three days. This step was the first of its kind for V-Thru and achieved great success, enabling users of the V-Thru application to enjoy an exclusive iPhone 13 offer without the need to leave their car, with the aim of improving the customer experience and reducing the potential harm caused by the COVID-19 virus, in order to ensure the health and safety of everyone.

Abdulaziz Yaqoub Al-Babtain, CEO of Ooredoo Kuwait, expressed his happiness at the success of the launch event and said: “I would like to extend my gratitude, thanks and huge appreciation for the tireless efforts of everyone including Ooredoo family members and also all the unknown foot-soldiers who laboured behind the scenes, on the success of this year’s iPhone 13 event. We take pride of offering our customers with the best plans in the market at competitive prices, in addition to treating them with exclusive benefits and complimentary valuable gifts with Shamel Pro plans for the first time.”

Al-Babtain added: “This year’s event is distinct and different from previous years, as it witnesses a strategic partnership with the leading bank in Kuwait and the region, the National Bank of Kuwait (NBK), of which we are proud. Hence, we gave the bank’s customers the priority in obtaining special and exclusive offers, and allocated a special hall to welcome the bank’s VIP customers as well as our Al Nokhba customers.”

“We are also proud to collaborate for the first time with the creative Kuwaiti minds and owners of the V-Thru application – the first application of its kind in the country allows users to order and receive their orders from hundreds of restaurants using the Drive-thru system. During the iPhone 13 event, Ooredoo assigned the V-Thru customers a special entrance and area in the parking lot and customers were able to receive their iPhone 13 orders without leaving their cars. This step ensured a smooth and easy purchasing process and an exceptional customer experience that happens for the first time in Kuwait” Al-Babtain concluded.

On his part, Mijbil Alayoub, Senior Director, Corporate Communications, at Ooredoo Kuwait said: “Ooredoo Kuwait has been committed for years to provide its customers with unique iPhone offers and to exceptionally reward them through continuously holding special events and campaigns, as part of its endeavors to ensure providing its customers with an exclusive array of draws and prizes that meet their needs and expectations. Hence, rewarding customers is an essential pillar of the company’s strategy to enrich the customer experience.”

“Ooredoo offers customers of the National Bank of Kuwait (NBK) an elevated digital experience using eligible NBK Debit Cards which are; Thahabi, Privilege Banking Visa Platinum Debit Card, and Private Banking Visa Platinum Debit Card. According to the offers, NBK customers from the holders of eligible cards have the priority to purchase the desired iPhone 13 at exclusive prices, in addition to enjoying the privilege of entering the company’s VIP and Al Nokhba hall, which was exclusively designed for them with a high level of service, luxury and sophistication. Ooredoo has also been keen to announce its iPhone 13 special and exclusive offers to its Al Nokhba customers, including valuable gifts and unique benefits. However, the bank’s customers will get exclusive Shamel Pro plans starting from KWD 25 per month including gifts, and AirPods 2.”

In this context, the event included the distribution of prizes to the “Answer and Win” competition organized by Ooredoo, with the aim of rewarding the guests on the first day of the event, as well as the opportunity to enter a raffle for the grand prize, the Mercedes CLA upon the completion of the purchasing order. It also launched a competition in which guests had to answer the question “How many iPhone 13 boxes are there inside the Mercedes CLA?” correctly for a chance to win. The winner was announced on Thursday and during the event, and thus received several valuable prizes.

The entertaining program and competitions presented by Ali Chokr witnessed a high turnout and participation of the attendees, who expressed their happiness with all the exceptional events organized by the company, which always reflect the excellence of Ooredoo’s raffles, prizes, offers and services that confirm its leadership and superiority.

Thank you the Ministry of Interior

The presence of the Ministry of Interior members throughout the iPhone 13 launch event and for a period of 3 days is highly appreciated, in which they contributed to organizing the influx of attendees and ensured to maintain security and safety of everyone. Ooredoo also extends its thanks to the MoI Assistant Undersecretary of the Operations Affairs Maj. Gen. Jamal Al-Sayegh, for his continuous efforts and support, along with Lieutenant-Colonel Basel Al-Turki, Major Nasser Bu Abbas, First Deputy Mohammed Al-Qattan, Sergeant Shahnaz Al-Enezi, Sergeant Saif Al-Mishaal, Corporal Abdulwahab Al-Qallaf, First Sergeant Ali Shweikro, Deputy Sergeant Hassan Al-Qallaf, Muhammad Mayouf Al-Anzi and Lieutenant The first is Abdullah Ghaleb Al-Enezi and a policeman, Turki Al-Enezi.

Ooredoo hosted the team of Kuwait Pulse Radio Team 88.8 FM’s Diwanyat Al-Yaqout and Al-Ansari with Talal Al-Yaqout and Khaled Al-Ansari, where the activities of the event were broadcasted live and interviews were held with representatives of Ooredoo and the National Bank of Kuwait.

Ooredoo Kuwait was established in December 1999 as the second operator in the country. Today, since then, the company offers mobile, broadband internet and corporate managed services tailored to the needs of customers and businesses. The company operates number of telecom operators in the region: Ooredoo Algeria, Ooredoo Tunis, Ooredoo Maldives, and Ooredoo Palestine. Ooredoo Kuwait is a member of the international Ooredoo Group based in Doha, Qatar.