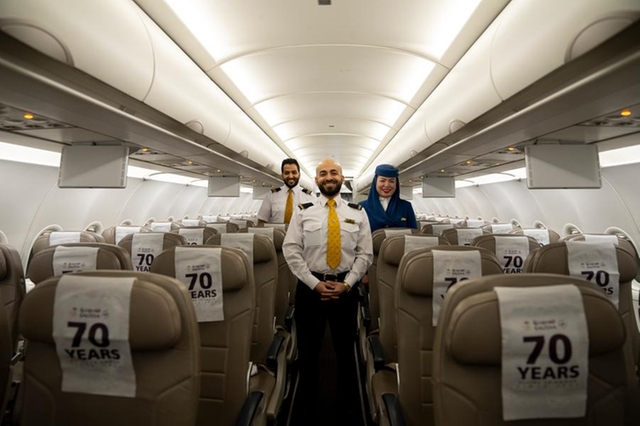 Saudi Arabian Airlines (SAUDIA), the national flag carrier of Saudi Arabia, has celebrated its 70th anniversary of flying to Jordan with a flight activation.

SAUDIA launched services to Amman in 1952, and today operates an average of eight flights a day between the Jordanian capital and the Saudi cities of Jeddah, Riyadh and Medina.

Commemorating the platinum anniversary, SAUDIA operated special flights from Amman to the Kingdom where guests were invited to celebrate at the airport terminal and onboard; and were presented with commemorative souvenirs.

Mr. Waleef Abualnaja, SAUDIA Manager of Jordan, Lebanon, Iraq and Syria, said, “Amman is an important destination for SAUDIA. We continuously strive to provide our guests with the best service – both in terms of our onboard offering and convenient flight schedules. From our humble beginnings seventy years ago, we have significantly grown our capacity to keep up with strong customer demand.

“This route serves guests during the Hajj and Umrah seasons, as well as benefiting many guests working in the Kingdom of Saudi Arabia who frequent travel. We are proud of our continuous operations between our two Kingdoms and look forward to further strengthening our seven-decade commitment to Jordan.”

There is strong demand for capacity between Jordan and Saudi Arabia. In 2022 alone, SAUDIA has operated nearly 2,000 flights from Amman, carried more than 160,000 business travelers and tourists between the kingdoms, as well as pilgrims performing Hajj and Umrah.

The Jordan-Saudi Arabia routes are served by a fleet of modern narrow- and wide-body aircraft from the Airbus family, including the A320, A321 and A330.

Onboard, guests can enjoy more than 5,000 hours of films and TV shows, E-books, shopping and weather reports, guests can also order their meals, shop and check real-time flight progress from the comfort of their seats. Kid Mode has been created especially for SAUDIA’s young guests and boasts an assortment of popular children’s cartoons, movies and games.

SAUDIA connects guests from Jordan to more than 100 destinations around the world via its state-of-the-art hub at King Abdulaziz International Airport in Jeddah and other key stations around the Kingdom.

SAUDIA has reiterated its commitment to providing world-class services and launching new routes to bring the world to Saudi Arabia as part of the ‘Wings of Vision 2030.’ The carrier recently expanded its global network with new services to Barcelona and Malaga, Spain; Mykonos, Greece; Zurich, Switzerland and Seoul, South Korea.