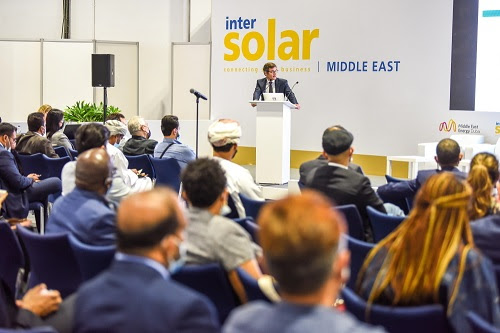 Antonie Poussard, Manager Partner, Finergreen, revealed that with the ambitious renewable energy targets, increased market liberalisation, and the enormous solar potential, the solar PV sector in the Middle East is set to boom over the next five years.

Speaking at the Intersolar Conference this morning, Poussard said, “Saudi Arabia plans to increase its installed PV capacity by adding 9.5GW by 2023. Achieving this goal will result from policymakers reshaping the legal framework governing foreign investments and renewable energy. This, coupled with continued market liberalisation, is how Saudi Arabia will unlock its full solar potential.”

According to the report, Saudi Arabia’s National Renewable Energy Programme (NREP) will be the mechanism for delivering the country’s Vision 2030, which forecasts energy consumption to increase threefold between 2016 and 2030.

“Thanks to the Ministry of Energy’s aim to increase the share of natural gas and renewable energy sources by approximately 50% by 2030, there are ample opportunities for private sector investment and public sector partnerships which have already attracted the attention of the likes of Acwa Power, EDF, Masdar and JinkoSolar,” added Poussard.

The report also highlighted Jordan’s plans to decrease its dependency on fossil fuel imports with an ambitious renewable energy target with electricity generation from renewables set to reach 31% by 2030. The data also revealed a remarkable breakthrough between 2015-2020 by raising renewable energy’s share in the electricity mix from 1% to 14%. However, it was also outlined that bold measures would be required to meet targets and a need for the public and private sector to work in tandem.

Data also revealed Egypt is repositioning itself as a regional energy leader with strong clean energy investment ambitions and is viewed as an example for neighbouring countries across the Middle East and Africa. However, the report highlighted that achieving the country’s clean energy transition and meeting renewable energy targets will be tied to implementing conditions that attract further investment and improve business environments.

Oman has also resumed its ambitious development plan for renewables after successfully securing financing for its first utility-scale solar plant, which will be essential for the success of the country’s energy transition.

As part of today’s conference programme at Middle East Energy, the Global Energy and Utilities Forum will focus on finance, with the opening panel discussion addressing Funding the Energy Transition. According to the International Renewable Energy Agency (IRENA), energy transition technologies will require investments of around USD131 trillion by 2050. Discussing this and other critical topics related to funding were Tim Palmer, Head of Renewables & Transition, UK Export Finance; Gurmeet Kaur, Partner, Pinsent Masons LLP; and Rajit Nanda, Advisor to the CEO, ACWA Power.

Speaking about the uptake in export finance, Palmer said, “Since setting up renewables and transition just over a year ago, we have seen remarkable take-up of our offering, so much so that we are already looking to expand our team – underscoring the demand within the market. Exporters and contractors are coming to us across the whole range of renewable sectors, both in mature technologies and very much from an emerging perspective.”

As part of Informa’s commitment to providing the highest hygiene and safety levels, the event will again take place under the protocols introduced via the company’s Informa AllSecure health and safety mandate. The event will be at 100% capacity as per the recent rule changes by the UAE Government.