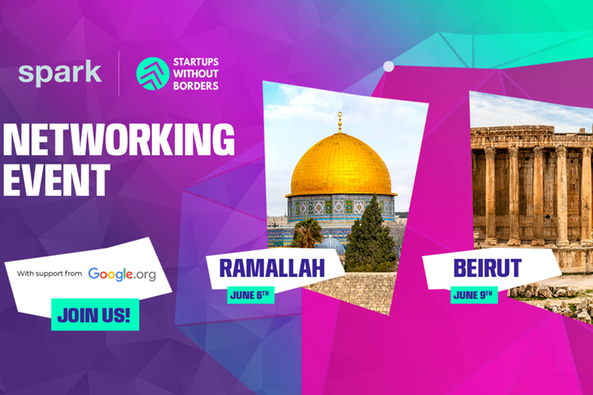 Startups Without Borders and SPARK are hosting the Startups On The Move Networking events, a series of ecosystem events happening in June to connect entrepreneurs from diverse backgrounds with key ecosystem players in the Middle East.

The events are part of the Startups on the Move Incubation program, launched with support from Google.org, which involves a 5-month incubation and mentorship program for 130 entrepreneurs.

The series will kick-start on June 6th in Ramallah, hosted by Palestine Techno Park, including high-level speakers from the Palestinian startup ecosystem, including Majd Khalifeh, CEO of Flow Accelerator, Noor M. Dkeidek, Co-founder and Chair of the Board at ITIQ, and Saeed Karzoun, co-founder and CEO at Al Jabal.

Heading off to Lebanon, Startups Without Borders and SPARK will host the second event in Beirut on June 9th, in partnership with Arabnet and Beirut Digital District, featuring the movers and shakers of the Lebanese startup scene, including Omar Christidis, founder of Arabnet, Andre Abi Awad, founder of Aces of Ventures, and Corine Kiame, Chief Investment Officer at IM FNDNG.

The last event will be held in Erbil, Iraq, on June 13th, hosted by The Station, and will feature prominent speakers in the Iraqi ecosystem, such as Darya Jamil, Programs Manager at Five One Labs, Agribusiness expert Hyader Zeiad, and Ameen Hadeed, startup trainer and mentor.

The Startups on the Move incubation program started last April 21st through an online format, and will conclude on September 13th, when 10 semi-finalist startups will be awarded an all-expenses paid trip to Amsterdam to pitch on the global stage during the IGNITE Conference 2022. The winning startups will battle it out for cash prizes of $10.000 in the first place, while the second place winner will receive $5.000.

The events are open to the public, with registration here.