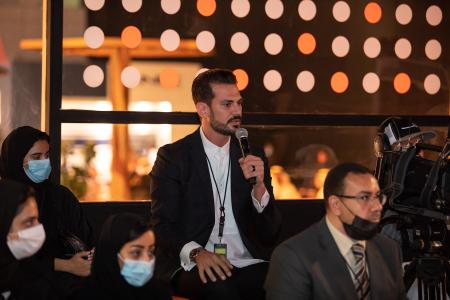 The 10th edition of the International Government Communication Forum (IGCF 2021) hosted a series of key discussions on the sidelines of the two-day forum to raise awareness and understanding about the significant role played by public communications and empower the youth, social media influencers and government communication departments.

The featured talks included ‘Influencers’ Forum: Infodemic’ and ‘Youth forum: The fifth generation of ideas’, among others.

The session was moderated by popular TV presenters Haitham Alhammadi and Nada Al Shaibani. Both emphasised the importance of cooperation between government communication departments and social media influencers, which could limit the infodemic, reaffirming the role of media institutions that are founded on the principles of accuracy and credibility.

Participants of the session, including prominent social media influencers from across the Arab world, media figures and students, lauded them for sharing their industry perspectives.

Haitham said, “There are many social media influencers who post news without verifying its authenticity and source to increase their following which is one of the major reasons behind the infodemic.”

Nada Al Shaibani argued, “Many users on social media are influenced by what celebrities post. The race to gain followers and lack of credibility are top problems of social media influencers. This may lead to crisis and false news.”

Participants also noted the criteria needed to integrate influencers into government communication departments — post a thorough analysis of their profiles, the type of content they create on their social platforms, and the efforts they undertake to verify the accuracy and authenticity of the content they post.

The fifth generation of ideas

The ‘Fifth generation of ideas’ session was moderated by TV presenter Marwan Al Shehhi and YouTube Content Creator Maitha Mohammed. They both speakers highlighted the role the youth play in helping achieve national identity of a country.

Al Shehhi stressed that the youth are the foundation of the future and they continue to help in the move to increase the knowledge of the younger generation, especially with the rapid advancement of technological innovations, including the emergence of social media platforms.

Maitha Mohammed shined the light on the tools and skills that are needed to invest in the youth – empowering them with the required skill sets like time management and setting priorities, which can help in the move to achieve their goals.

The session also reviewed the challenges resulting from the pandemic, both positive and negative impacts caused by these extraordinary times. Both speakers agreed that the pandemic encouraged today’s youth to evaluate and prioritise their goals, while others had their projects and ambitions hindered by the pandemic.