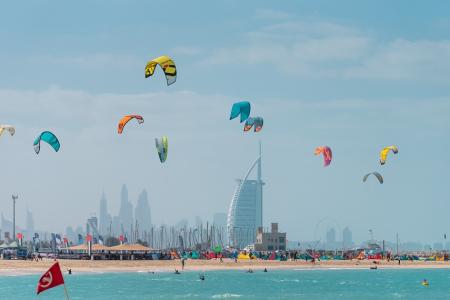 The UAE Government Media Office announced the success of the second edition of the “World’s Coolest Winter” campaign, that was launched by His Highness Sheikh Mohammed bin Rashid Al Maktoum, Vice President and Prime Minister of the UAE and Ruler of Dubai, on December 2021. The campaign promoted tourism, natural sites and entertaining destinations and experiences across the seven emirates of the UAE. Achieving qualitative results for national economy, and a marked increase in the domestic tourism, the campaign raised the revenues of hotel establishments to 1.5 billion dirhams, compared to 1 billion dirhams in its first edition last year, marking an increase of 50%.

The campaign recorded a remarkable turnout and participation on social media, achieving more than half a million interactions from around the world on different platforms, while the reach rate exceeded half a billion. Also, It was accompanied by more than 87 media interviews and 53 press releases, while the #WorldsCoolestWinter hashtag was used in more than 71,000 photos and videos on social media.

More than 260 promotional videos for the campaign were produced by the UAE Government Media Office, while 106 content makers submitted 175 videos about the campaign, which collectively achieved 129 million views.

The campaign proved once again the advanced position of the UAE as a major tourism destination in the world, highlighting its beauty, the spirit of its people and their authentic human values and warm hospitality.

The World’s Coolest Winter was launched locally on the 15th of December 2021, and was implemented by the UAE Government Media Office, in cooperation with the Ministry of Economy and various entities concerned with tourism, culture and heritage, aiming to highlight the various tourism destinations in the country. The campaign succeeded once again in introducing UAE’s beautiful nature, culture, heritage, history, architecture and landmarks, to local and international audience and to highlight the distinguished tourism experience in each of the seven emirates.

His Excellency Dr. Ahmed Belhoul Al Falasi, Minister of State for Entrepreneurship and Small and Medium Enterprises, and Chairman of the Emirates Tourism Council, said that launching initiatives, such as the World’s Coolest Campaign which strengthens internal tourism, is a main pillar and engine for economic development within the projects of the next 50 years, adopted by His Highness Sheikh Khalifa bin Zayed Al Nahyan, President of the UAE,

His Excellency added, “The different activities during the “World’s Coolest Winter” campaign have shown the UAE’s landmarks and destinations in a new way, by introducing visitors to the UAE’s unique tourism potential, providing them with the opportunity to enjoy natural beauty, tourism services, rich cultural, historical and environmental heritage, and to undergo exceptional experiences during the winter vacation.”

His Excellency Belhoul indicated that the UAE, through its unique tourist, heritage and urban attractions, has become one of the most preferred destination for tourists from all over the world. Adding that: “The World’s Coolest Winter campaign has contributed to supporting the tourism sector and increasing its growth, which reflects the flexibility and the safe environment that characterizes the economy and tourism sector in the UAE.”

His Excellency concluded: “We will continue to promote domestic tourism, as we believe it is a strategic axis of the national economy and development journey. the Emirates Tourism Council, will continue in presenting plans and enhancing efforts, through coordination and joint work with all stakeholders in the tourism sector, to double the results that have been achieved, by 2030.”

His Excellency Saeed Al Eter, the Chair of the UAE Government Media Office, said that the UAE driven by its rich, highly equipped and efficient heritage, entertainment and cultural components and destinations, is now considered one of the most sough-after destination in the regional and global tourism industry.

His Excellency added: “The World’s Coolest Winter campaign, and its success in achieving record numbers, reflects the wise vision of  His Highness Sheikh Mohammed bin Rashid Al Maktoum, Vice President and Prime Minister of the UAE and Ruler of Dubai. It also represents the country’s impressive success in highlighting its unique tourism capabilities, and the confidence of the world in the UAE tourism product.”

Unique initiatives during the campaign

As part of celebrating mild weather and tourist destinations in the UAE, the campaign also witnessed the launch of “Let’s Make Their Winter Warmer” campaign, in cooperation with the United Nations High Commissioner for Refugees, Mohammed bin Rashid Al Maktoum Global Initiatives, the Network of Regional Food Banks and YouTuber Hassan Suleiman “Abu Fella”. This campaign contributed to raising $11.5 million donated by 155,000 donors from 120 countries around the world, for the benefit of 110,000 refugee and displaced families and disadvantaged families in the Arab region and Africa, enabling them to overcome harsh winter and secure their basic needs.

The initiative was recognized by The Guinness Book of World Records for the longest continuous live broadcast (video) of 268 hours,.and the largest number of direct views in one moment for a humanitarian campaign via YouTube, with total of 700,000 views at the same time. also, the humanitarian initiative recorded more than 800 local, regional and international media coverage, reaching 20 million people, and 163 million views, while 29,258 people interacted with the campaign directly on social media.

The campaign also launched the “World’s Coolest Winter photography competition”, organized by The Hamdan Bin Mohammed Bin Rashid Al Maktoum International Photography Awards (HIPA), in cooperation with the UAE Government Media Office. The competition aimed at encouraging amateur and professional photographers to capture the most beautiful recreational, cultural and natural landmarks of the UAE and introducing its diverse tourist activities. It received more than  2,800 entries from 89 nationalities.

The campaign shed light on the values ​​of tolerance, coexistence, respect for human diversity, and the warm hospitality of the people in the country. It also shed light on the country’s unique tourist attractions and diverse activities that include environment and sustainable tourism, desert tourism, beach tourism, mountain tourism, adventure tourism, Cultural and heritage tourism, Festivals and events tourism, which includes arts, musical and entertainment activities, in addition to Expo 2020 Dubai, the largest human event of its kind in the world, beside Shopping tourism that provides visitors with shopping festivals, offers and discounts across the country, while health and hospitalization tourism offers the opportunity to benefit from world-class health and recreation services.