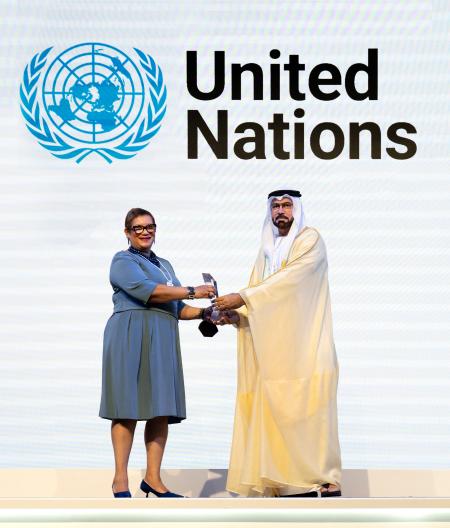 The award came in recognition of the UAE’s achievements in the field of government modernization, building new models of future governments, and its global efforts in exchanging knowledge in the field of government modernization with countries regionally and worldwide.  The ceremony was attended by His Excellency Mohammad Abdullah Al Gergawi, Minister of Cabinet Affairs, and Her Excellency Catherine Pollard, Under-Secretary-General for Management Strategy, Policy and Compliance.

His Excellency stated that, “The award reflects the UAE’s exceptional achievements in developing an agile government model based on designing proactive services, promoting efficiency and enhancing competitiveness.”

“The award came as a new international testimony on the development of the UAE, led by a futuristic, pioneering and innovative government, and demonstrating the vision of its leadership aiming to develop proactive future services. It further reflects the global appreciation of its role in modernizing government work on the basis of continuous development, enhancing future readiness, and applying digital transformation,” he stressed.

H.E. further added; “We take pride in our exceptional leadership that has rendered the UAE a global model for government development, an international reference for shaping future governments, and a hub for developing best government practices and enhancing efficiency and quality performance.”

H.E. Mohammad Al Gergawi extended his thanks and appreciation to the United Nations for honoring the UAE’s government and celebrating its success story, stressing the organization’s pivotal role in the advancement of countries, governments and nations worldwide.  He pinpointed that the UAE government is keen to promote fruitful cooperation with the UN, as it strongly believes in the importance of promoting international cooperation to secure a better future for mankind.

Her Excellency Catherine Pollard commended the experiences of the UAE government, and the advanced models it has developed in the field of public service. She further noted that the special award presented by the UN reflects its appreciation of the efforts and initiatives of the UAE government, its unique model of government work, and its effective partnership with countries and international organizations for exchanging knowledge and sharing experiences.

“As we gather at the first UNPSA ceremony since the beginning of the pandemic, we seize the opportunity to thank public servants everywhere for their continued dedication, and celebrate public service inspiring initiatives that resulted from their innovations and commitment to enhance public services delivery to achieve sustainable development,” she added.

Over the past years, the UAE government has launched strategic partnerships in the field of government modernization under the umbrella of the government knowledge exchange program, with 9 countries worldwide. The partnerships yielded 241 successful initiatives in more than 55 work fields, and upskilled 290,000 employees and trainees through 3 millions training hours and 565 workshops.

The UAE ranked first regionally and 21st globally in the E-Government Survey 2020 conducted by the United Nations Department of Economic and Social Affairs. According to the Global Competitiveness Report issued by the World Economic Forum (WEF), it ranked third globally on the Government’s Responsiveness to Change indicator and fourth on the Government Long-term Vision indicator. The UAE also ranked third globally as the most trusted government according to the 2021 Edelman Trust Barometer.

In addition, the UAE Government Accelerators, the first of its kind worldwide adopting acceleration and innovation to develop proactive solutions for addressing challenges, has become a hub for knowledge partnerships worldwide.

Moreover, the UAE government has also launched the World Government Summit, which serves as the largest global platform that brings together government officials and experts from around the world to shape the future. Since its launch, the Summit has held up to 1000 sessions and hosted more than 25,000 participants and 40 international organizations. It also has signed more than 80 agreements and published more than 100 reports.