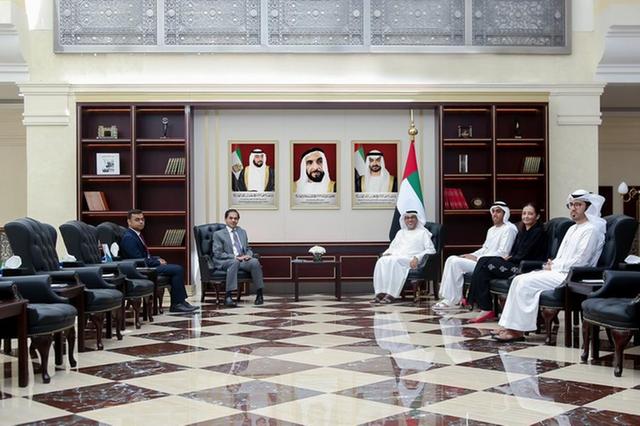 Mohamed Saif Al Suwaidi, Director General of Abu Dhabi Fund for Development (ADFD), and Chairman of the Exports Executive Committee of the Abu Dhabi Exports Office (ADEX), hosted at ADFD headquarters Sunjay Sudhir, the Ambassador of India to the UAE. The talks were held against the backdrop of the Comprehensive Economic Partnership Agreement signed this year by the two countries, which is expected to boost bilateral nonoil trade to US$100 billion in five years, from the current US$60 billion. The meeting was attended by Khali Al Mansouri, Acting Director General of ADEX, and other officials from both sides.

Al Suwaidi reflected on the historical relations between the two countries, underscoring the significance the partnership agreement holds, especially at a juncture when the UAE and India have reached critical milestones in their respective journey as a nation.

“As the UAE celebrates the Year of the 50th, it has laid out a clear vision for the next 50 years of development. Our own occasion has coincided with India’s 75th anniversary of Independence, with country having embarked on a long-term developmental advancement with renewed vigour and enthusiasm. These occasions present us with unprecedented opportunities to walk and work together and collaborate to deliver on our promises over climate aspirations and sustainable development,” Al Suwaidi said.

Reiterating keenness to work with India as a strategic partner towards common developmental objectives, Al Suwaidi highlighted ADFD’s expanded role as a driver of the UAE’s export sector through its dedicated arm, the Abu Dhabi Exports Office (ADEX).

“We established ADEX in 2019 to boost national exports, which we consider to be a catalyst in diversifying our economy and to build a knowledge-based society, in line the UAE’s strategic vision. What’s more, ADEX has created a model for inclusive and mutual development whereby both the exporter and the importer stand to benefit equally, making it an attractive option for Indian importers to consider,” Al Suwaidi added.

He explained how ADEX’s innovative financing tools enable Emirati exporters to expand their horizons, while offering tailored and flexible financing solutions for foreign buyers to purchase goods and services from the UAE.

Ambassador Sunjay Sudhir emphasised to Al Suwaidi the longstanding partnership between India and the UAE. Referring to the Comprehensive Economic Partnership Agreement signed in February and a historic decision taken in 2017 by the leaders of the two countries to elevate bilateral ties into a comprehensive strategic partnership, he said: “As our ties are going from strength to strength, ADFD and ADEX can be a vehicle to take them to the next level. As a dominant Asian economy, India has the potential to turn our common aspirations into reality through this partnership.”

He expressed confidence about stronger and broader collaborations with the UAE, as well as ADFD and ADEX stressing the fortitude, resilience and the depth of friendship of the two nations that have shone through in the face of adversity.

Khalil Al Mansouri communicated to the Indian envoy ADEX’s interest to develop the economic and trade partnership with India, highlighted the exports office’s aim to finance and support national exporters and enable them to reach global markets, in line with the UAE’s strategic vision to diversify its economy. “Further cooperation with India will enable us to move more quickly towards achieving this strategic objective, while also developing our export sector and consolidating the UAE’s position as a global trading hub,” he added.

India is a major trade partner and largest export destination for the UAE. According to 2021 statistics, India accounted for 9% of the country’s total foreign trade, with nonoil exports accounting for 13% of the total of these exports.