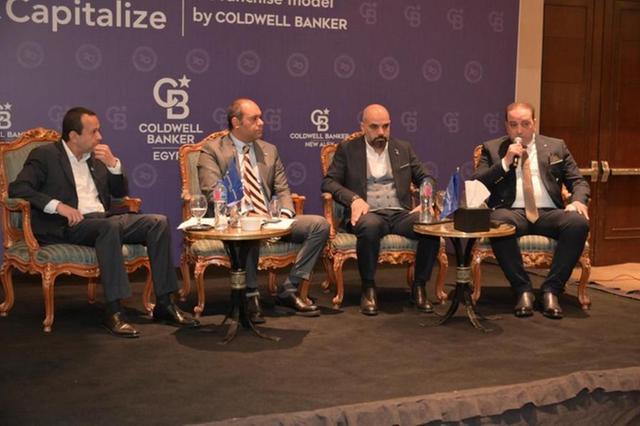 During a recent press conference, Coldwell Banker – Egypt; a pioneering Real Estate Investment and Marketing company, announced the addition of New Alex and Platinum companies to its robust “Franchise Program”.

To begin with, the “Franchise Program” was launched in 2021, with the aim of supporting the investors and entrepreneurs, who operate in the field of Real Estate, via aiding them to set up successful projects, or even expand existing ones.

The program also seeks to achieve a lucrative Return on Investment (ROI), while simultaneously being able to conform to the new requirements of the Egyptian Real Estate market.

When it comes to Coldwell Banker – Egypt’s expansion plan in Alexandria, the company took it upon itself to prompt the joining of the Alexandria-based companies; New Alex and Platinum, as part of carrying on the accomplishments of its “Franchise Program”, and extending its success across Egypt.

To further explicate, it is expected that after the cooperation, which took place between the aforementioned parties, the provision of a distinguished Real Estate consultancy service to the people of Alexandria will ensue, accordingly.

While expressing his elation at the joining of New Alex and Platinum to the Franchise Program, Karim Zain elucidated: “The urban renaissance that Egypt is currently witnessing, has undoubtedly contributed to the creation of new foundations and standards for working in the Real Estate sector, especially amid the increasing interest in the establishment of new, smart cities, which are commensurate with the global Sustainable Development Goals (SDGs), along with Egypt’s 2030 Vision.” Zain has also underscored the success of Coldwell Banker’s operation in Egypt, which has been spanning for more than 20 years, and through which the company has been able to accomplish a myriad of success stories, ranging between joining forces with over 100 Real Estate developers, and advancing the skills and capabilities of more than 200 Real Estate experts.

To add to what was previously mentioned, Zain also stated: “For two decades, Coldwell Banker has succeeded in becoming the clients’ first choice and outright source of trust, as Coldwell Banker made it easier for its clients to make decisions, thanks to its diversified portfolio of services.” Zain concluded: “During the coming period, we are planning to unveil a myriad of unparalleled surprises for our clients in the CB Star Club, and we are also working closely with a number of success partners to achieve more than EGP 10 billion in third-party sales in 2022.”

For his part, Sherif Mahmoud confirmed that Coldwell Banker is relentlessly on the lookout for widening the scope of its “Franchise Program”, just to be able to support and empower the largest number of beneficiaries, while abiding by the mechanisms that regulate the Egyptian Real Estate sector.

Sherif added: “Through this program, we are looking forward to exchanging our gained experiences, at the local and global levels, via providing best-in-class training programs to build capacities, and thus enhance consulting, sales, and marketing skills.”

He also pointed out that the subscription requests exceeded expectations, as almost 500 serious requests are being studied, at the moment. He also mentioned that there are more than 8 offices that have already joined the program within the two-month span that followed its launch.

As for New Alex’s side, Hussein Younes said: “The Franchise Program comes off as an important step for the development of Real Estate Marketing in Alexandria, as it is bound to push the wheel of investment by enticing a multiplicity of development projects into this vital city.” Younes also added: “We certainly believe that every Real Estate investor has a crucial role in upholding the sector and its workers by sharing experiences with Coldwell Banker; an entity that acquires more than 115 years of inveterate and extended expertise in the Real Estate field, not merely locally but also worldwide.” Speaking on Platinum’s behalf, Mosaab Madi took pride in joining the program, highlighting that it guarantees a high ROI for the small and medium-sized enterprises, and for the up-and-coming investors in the Real Estate scene.

Not to mention, Coldwell Banker – Egypt’s business portfolio comprises a wide range of distinguished services, including development market, primary market research, asset evaluation, development management, capital services, and many other services pertinent to the Real Estate marketing for both the developer and the client.

It is also noteworthy that via the “Coldwell Banker Training Academy”, the company offers its expertise in the field of Real Estate, at large, while enabling trainees to get hold of the looked-for skills that would help them navigate their way through this vast field.