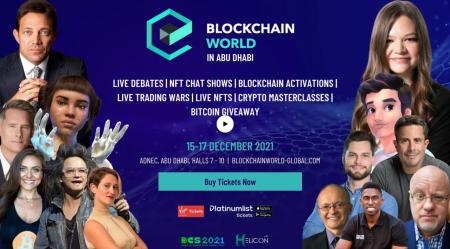 “The Wolf of Wall Street” himself, Jordan Belfort, will be attending the Global Distributed Cloud Storage Summit (DCS 2021) as part of Blockchain World Abu Dhabi.  Belfort is joining as a key speaker and host for several Business Club VIP events throughout the programme, designed to delve into all things blockchain, including lunch sessions and several activities during the festival.  Having evolved from a Bitcoin Bear to a Blockchain Bull, Belfort is not only incredibly enthusiastic about the future of the metaverse but also a direct contributor,  with several upcoming NFT collections, inspired by his personal life and the incredible 2013 film “The Wolf of Wall Street”, a cryptocurrency portfolio and is an investor in digital projects and culture, such his 102.49 ETH purchase of ‘Cryptopunk #6033‘.

“Currently, the MENA region is poised to become a real driving force in blockchain innovation, thanks in part to numerous government initiatives, including the Emirates Blockchain Strategy 2021 and Dubai Blockchain Strategy,” states Jordan.  “There is a real possibility of the UAE in particular becoming the capital of blockchain technology, which is why I see it as the ideal location to host the 2021 DCS Summit, as part of Blockchain World in Abu Dhabi,” finishes Belfort.

THE CAPITAL OF BLOCKCHAIN

The core appeal of the event is the 200 leading experts in blockchain technologies that will be delving into the virtual world’s most detailed and relevant realms through several keynote speeches, panel discussions, and live chat show interviews. As the days count down, Head of the DCS Organising Committee Adam Geri is looking forward to enjoying the fruits of his labour.  “We really have a wonderful three-days planned for the over 20,000 visitors that are due to pass through the doors of the Abu Dhabi National Exhibitions Centre,” says Geri. “The event is structured in a way that supports meaningful interactions between speakers, experts, participants and entrepreneurs. The leading conference, which will be streamed live from DCS’s state-of-the-art studio, will bring together influencers, speakers, experts, and panellists from all industries breaking into the blockchain space. With the global blockchain market expected to go up to $23.3 billion by 2023, this is not an event to miss.”

“As it stands, the world is predicted to spend up to 15.9 billion in blockchain-related tech by 2023 and, in fact, during the DCS Show, significant discussion will focus on how Abu Dhabi can build a multi-billion-dollar blockchain economy, including a roadmap to a greener blockchain in line with the UAE 2030 vision,” adds Geri.

Leading the convergence of experts to Abu Dhabi are the likes of Oscar Clark, Chief of Curiosity at Fundamentally Games; Jason Brink, President of Blockchain and Gala Games; Brett King, founder of the pioneering neo-bank Moven and Christopher Travers, one of the leading lights in pseudonymity, social media identity, and pushing the boundaries of what brands can achieve through virtual influencers and the world’s digitisation.

Finally, the DCS 2021 event has created a series of engaging activities where guests can interact, learn, and be entertained. These include live demonstrations, NFT artist’ meet & greet’ events at the NFT art gallery, live ‘play & earn’ competitions and gaming activations at Gaming Zone, and crypto live-trading and giveaways at Crypto Zone.

Don’t miss Abu Dhabi’s ascendance as the capital of crypto. The event will be a hybrid, with live streaming and an in-person ticketed event on-site at ADNEC. Get your tickets for the unmissable event on Platinumlist HERE, Virgin Tickets HERE or via the DCS 2021 website HERE. Additionally, watch Blockchain World free on-demand HERE from anywhere in the world and be in with a chance of winning one BTC.