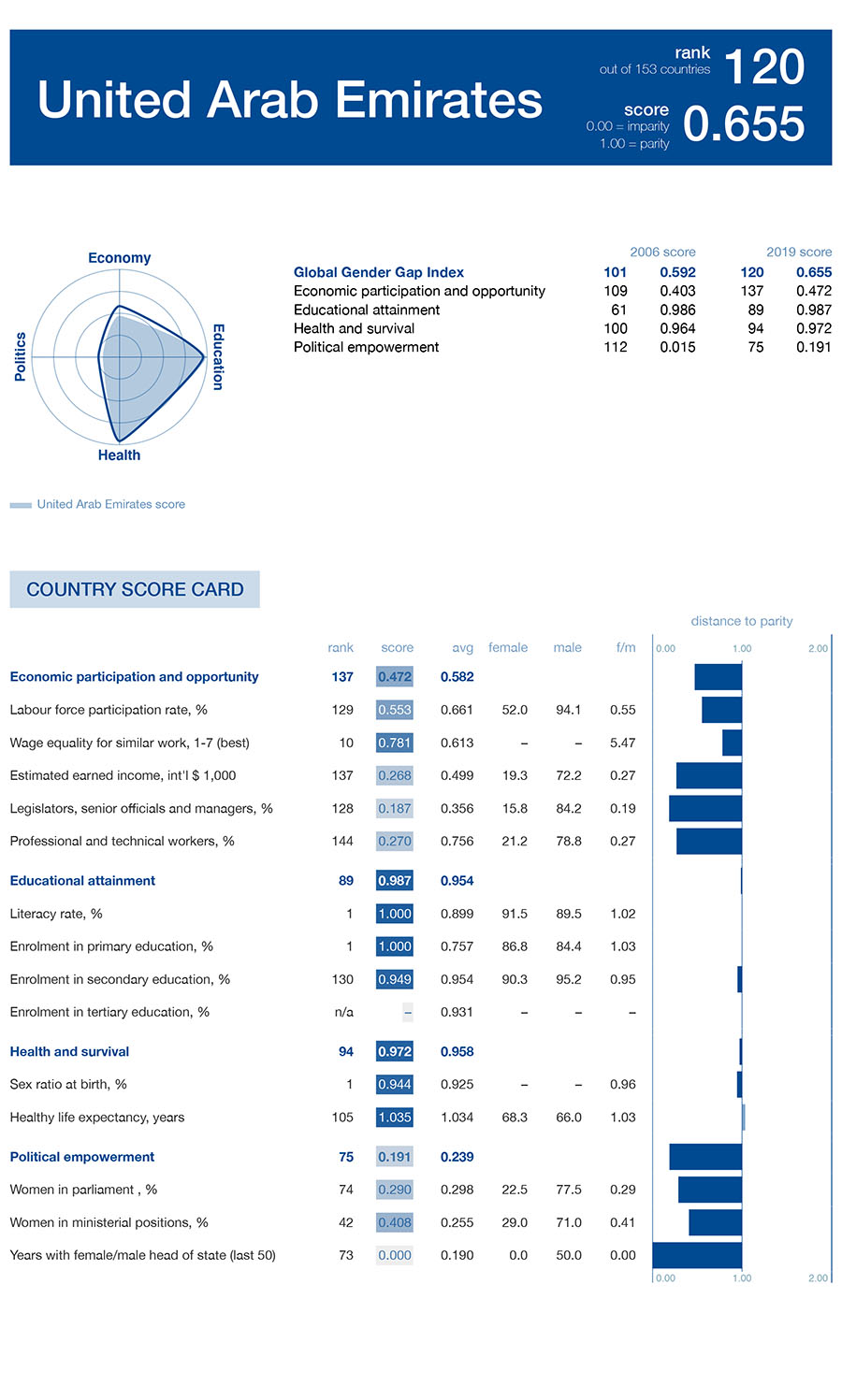 Another generation of women will have to wait for gender parity, according to the World Economic Forum’s Global Gender Gap Report 2021. As the impact of the COVID-19 pandemic continues to be felt, closing the global gender gap has increased by a generation from 99.5 years to 135.6 years.

Progress towards gender parity is stalling in several large economies and industries. This is partly due to women being more frequently employed in sectors hardest hit by lockdowns combined with the additional pressures of providing care at home.

The report, now in its 15th year, benchmarks the evolution of gender-based gaps in four areas: economic participation and opportunity; educational attainment; health and survival; and political empowerment. It also examines the drivers of gender gaps and outlines the policies and practices needed for a gender-inclusive recovery.

The deterioration in 2021 is partly attributed to a widening political gender gap in several large population countries. Despite over half of the 156 indexed countries registering an improvement, women still hold only26.1% of parliamentary seats and 22.6% of ministerial positions worldwide. On its current trajectory, the political gender gap is expected to take 145.5 years to close, compared to 95 years in the 2020 edition of the report, an increase of over 50%.

The economic gender gap has seen only a marginal improvement since the 2020 edition and is expected to take another 267.6 years to close. The slow progress is due to opposing trends –while the proportion of women among skilled professionals continues to increase, income disparities persist and few women are represented in managerial positions.

Although these findings are sobering, gender gaps in education and health are nearly closed. In education,while 37 countries have reached gender parity, it will take another 14.2 years to completely close this gap due to slowing progress. In health,over 95% of this gender gap has been closed, registering a marginal decline since last year.

“The pandemic has fundamentally impacted gender equality in both the workplace and the home, rolling back years of progress. If we want a dynamic future economy, it is vital for women to be represented in the jobs of tomorrow. Now, more than ever, it is crucial to focus leadership attention, commit to firm targets and mobilize resources. This is the moment to embed gender parity by design into the recovery,” said Saadia Zahidi, Managing Director, World Economic Forum.

The past year saw a significant improvement in the performance of the UAE, the country is successfully bridging the gender gap and achieving gender equality. In this year’s report is the UAE ranks among the top 5 improved countries. Having moved forward a total of 48 placements, the UAE has once again topped the region, followed by Tunisia, Egypt and Jordan.

The UAE’s leadership position among its neighbouring countries is an indication that the it maintains the momentum despite the various impacts caused by the COVID-19 pandemic, which had a significant effect on the performance of countries around the world in this year’s report.

According to the report, the UAE has so far bridged 71.6% of its gender gap, several performance indicators have witnessed improvement, such as the Political Empowerment indicator, which saw a closure of 4.03 of the gap, here the UAE ranks 24th globally compared to 75th last year.

As for the Economic Participation and opportunity indicator, the UAE closed 5.10, compared to 4.72 last year. Overall, wage equality for similar work, and the estimated earned income have both improved, additionally, the number of the female legislators, senior officials and managers has also seen an increase.

Roberto Crotti Quantitative Economist and Manager with the Global Competitiveness and Risk at the World Economic Forum said: “The United Arab Emirates is one of the most improve countries in the 2021 edition of the Global Gender Gap Index. It has closed its overall gender gap by over 6 percentage points, climbing 48 positions to the 72nd place. Since the previous Global Gender Gap edition, the country has narrowed gaps both in terms of Political Empowerment and in terms of Economic Participation and Opportunity.”

“Although there are still gaps to be closed, the country is progressing at a fast pace. Notably, the country has achieved equal representation of women and men in the parliament,” he added.

The pandemic has had a more negative impact on women than men, with women losing jobs at higher rates(5% vs 3.9% among men, International Labour Organization), partly due to their disproportionate representation in sectors directly disrupted by lockdowns, such as the consumer sector. Data from the United States also indicates that women from historically disadvantaged racial and ethnic groups are worst affected.

Data from an Ipsos survey suggests that when care establishments closed, housework, childcare and eldercare responsibilities fell disproportionately on women, contributing to higher levels of stress and lower levels of productivity.

As the job market recovers, LinkedIn data shows that women are being hired at a slower rate in multiple industries. They are also less likely to be hired for leadership roles, resulting in a reversal of up to two years’ progress.

Sectors with historically low representation of women are also those with fast-growing“jobs of tomorrow”. In cloud computing, for example, women make up 14% of the workforce; in engineering, 20%; and in data and artificial intelligence, 32%;and it is more difficult for women to switch into these emerging roles than men. The report offers new metrics for tracking progress on closing gender gaps in the jobs of tomorrow. While care and education roles also offer areas of future growth and women have stronger representation, they are often lower-paid roles than other jobs of tomorrow.

“Women aren’t well represented in the majority of fast-growing roles, which means we are storing up even bigger gender representation problems as we emerge from the pandemic. These roles play a significant part in shaping all aspects of technology and how it is deployed in the world. We simply have to have women’s voices and perspectives represented at this foundational stage, especially as digitization is accelerating.Companies and governments need to build diversity, equity and inclusion into their plans for recovery. Assessing candidates on their skills and potential, and not just their direct work experience and formal qualifications, is central to that. Skills-based hiring is key if we’re going to make our economies and societies more inclusive,” said Sue Duke, Head of Global Public Policy, at LinkedIn.

How to shape a gender equal recovery

The pandemic’s combined effect of accelerated automation, the growing “double shift” of work and care, in parallel with other labour market dynamics such as occupational segregation, are likely to have a long-term impact on economic opportunities for women, risking inferior re-employment prospects and a persistent drop in income.

The report offers ways for countries to work towards closing their gender gaps. These include further investment in the care sector and equitable access to care leave for working men and women, policies and practices that proactively focus on overcoming occupational segregation by gender,effective mid-career skills-development policies for women, and managerial practices that embed sound, unbiased hiring and promotion practices.

The Middle East and North Africa region continues to have the largest gender gap (39.1%) yet to be closed. Despite a slight improvement (+0.5 percentage points), progress is slow, and it will take 142.4 years to close the gender gap, due in large part to the wide economic gender gap, with just 31% of women taking part in the labour force.

How the Forum is working on closing the gender gap

The Global Gender Gap Report is a publication of the World Economic Forum’s Centre for Shaping the Future of the New Economy and Society. The centre supplements its research into gender gaps with a growing portfolio of initiatives to drive progress.

Closing the Gender Gap Accelerators work with advanced and developing economies to create public-private collaborations for rapid acceleration to economic parity, focusing on increasing women’s participation in the workforce, closing the gender pay gap and helping more women advance into leadership roles and develop in-demand skills. The Hardwiring Gender Parity in the Future of Work initiative works with business to embed parity into the fastest growing emerging professions.

Working together, stakeholders deepen their understanding of complex issues, shape new models and standards and drive scalable, collaborative action for systemic change. Over 500 of the world’s leading companies, international, civil society and academic organizations, and governments currently work with the centre, aiming to reach 1 billion people with improved economic opportunities.