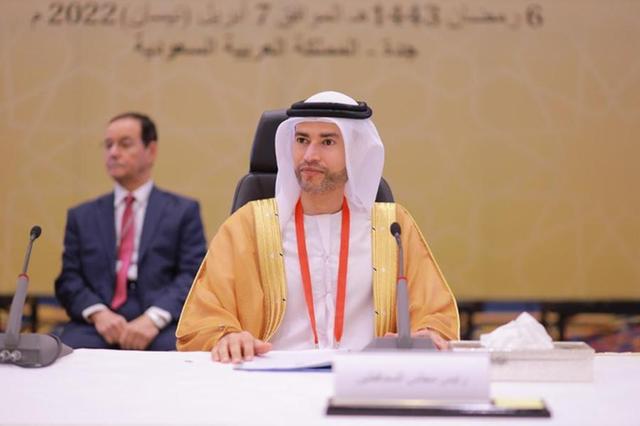 His Excellency Mohamed Bin Hadi Al Hussaini, Minister of State for Financial Affairs, headed the UAE delegation participating in the joint annual meeting of Arab Financial Institutions, which takes place today in Jeddah, Saudi Arabia. In attendance were Arab finance and economy ministers, governors of Arab central banks, heads of Arab finance institutions, and a number of representatives of regional and international organisations, as well as financial and economic experts.

The UAE delegation included H.E. Khaled Mohammed Balama, Governor of the Central Bank of the UAE (CBUAE), H.E. Younis Haji Al Khoori, Undersecretary of the Ministry of Finance (MoF), and a number of senior officials and financial experts from MoF and CBUAE.

His Excellency Mohamed Bin Hadi Al Hussaini noted the importance of these meetings as a leading Arab platform to discuss key financial and economic topics and updates, as well as future strategies and plans in sustainable development fields in Arab countries. That, in addition to opening channels of constructive dialogue to advance joint Arab economic growth, develop and activate its mechanisms, and benefit from other countries’ experiences.

His Excellency said: “The Ministry of Finance is keen to participate in these meetings to exchange visions and develop plans, to consolidate the Arab region’s position and boost the economies of its countries. The ministry is always keen to share experiences in the field of economy, and financial and monetary policies, and to introduce the UAE’s pioneering financial model and its forward-looking vision in building a better future for tomorrow’s generations.”

The annual meetings of the Arab financial institutions included:

During his opening speech at the 51st annual meeting of the Board of Governors of the Arab Fund for Economic and Social Development, His Excellency Mohamed Bin Hadi Al Hussaini thanked the Custodian of the Two Holy Mosques King Salman bin Abdulaziz Al Saud, King of the Kingdom of Saudi Arabia, and Crown Prince, His Royal Highness Prince Mohammed bin Salman bin Abdulaziz, for holding these meetings under their patronage. His Excellency Al Hussaini also thanked His Excellency Mohammed bin Abdullah Al-Jadaan, Saudi Minister of Finance, for hosting the meetings of Arab Financial Institutions.

His Excellency said: “The exceptional circumstances that Arab countries are witnessing have become an obstacle to development efforts, which requires us to turn these challenges into opportunities that advance economic and social development in Arab countries. The accelerating technological developments and the increasing competition in global markets requires us to strengthen cooperation and integration among the joint Arab financial institutions to preserve Arab interests, especially providing an appropriate environment to attract local, regional and foreign investments, in addition to promoting trade exchange between our countries to achieve Arab economic integration in various fields.”