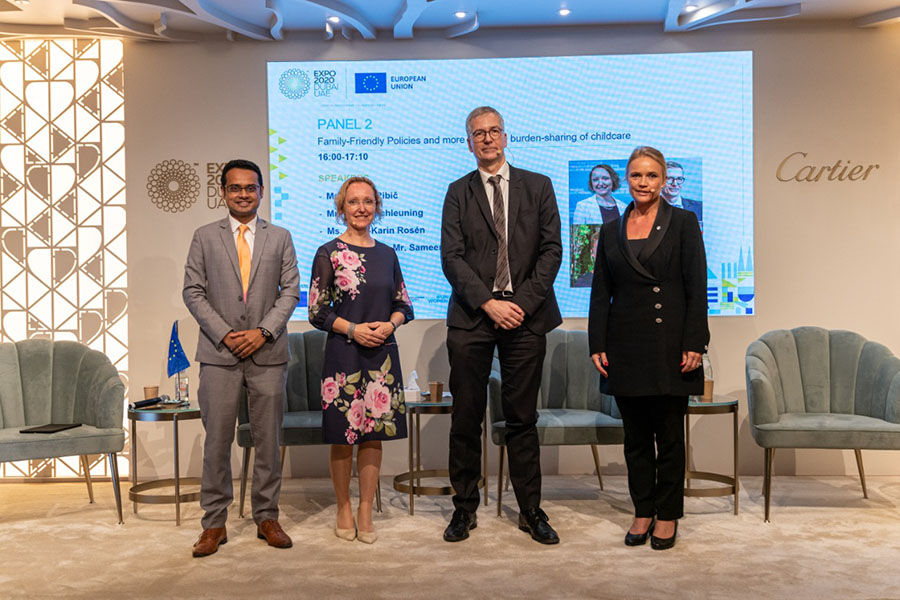 The European Union (EU) has held a high-level global forum to accelerate women’s empowerment and to discuss best policy practices to enhance women’s participation in the labour market of the 21st century.

The conversation brought together distinguished political, business and society leaders who are bringing about positive change in their communities around the world.

The forum called for immediate policy action to enable more equal family-friendly work environments and better work-life balance for working parents. In addition, the event showcased how some governments are putting women at the heart of their recovery agendas to build back better and create resilient and inclusive societies for all.

In her keynote remarks, Her Excellency Mona Ghanim Al-Marri, Vice President of the UAE Gender Balance Council, said:“We would like to thank the European Union Delegation and their partners for organising this event, bringing together world leaders and experts to engage in thought-provoking dialogues that will further enhance the influence of women. One of our key objectives at the UAE Gender Balance Council is to turn the discussions taking place throughout these events into effective, collaborative partnerships, concrete plans and workable strategies that realise the full potential of women and enhance their vital role in socio-economic development around the world.”

Her Excellency further said: “Today, government leaders are more aware than ever that women’s economic empowerment and achieving gender balance are key to advancing sustained economies, progressing national development, and building prosperous societies. Based on our experience in the UAE, and specifically the UAE Gender Balance Council, we have worked on enhancing women’s economic rights through referring to global reports and understanding the best practices for women in economy. We remain hopeful that with collective efforts and actions, we will continue to make important progress towards the empowerment of women across the globe.”

Addressing the first panel, entitled Women’s empowerment across all stages of their professional careers, H.E. Stella Ronner-Grubačić, EU Ambassador for Gender and Diversity, stated: “To achieve lasting change and advance women’ leadership in socio-economic and political decision-making, we need an inclusive and comprehensive approach, involving men and boys. We also need our own increased awareness that we want things to change and we need to start now”.

Speaking at the second panel, entitled ‘Family-friendly policies and more equitable burden-sharing of childcare ‘,MatejaRibič, State Secretary to Minister of Labour, Family, Social Affairs and Equal Opportunities of the Republic of Slovenia stated: “Slovenia has one of the best family policies in the world. Projects such as ‘Action dad’ support both parents to be equally involved in upbringing and care of a child.  Also, thanks to a well regulated kindergarten system, which enables women’s rapid transition to the labour market, Slovenia has had the highest share of full-time employed women with small children in the EU for decades, while also enjoying a low pay gap level.”

As part of his interventions on panel 3 entitled, ‘Policy action and best practice exchange’, Krister Nilsson, State Secretary to Minister for Foreign Trade and Nordic Affairs of Sweden, said: “Women’s empowerment is key to sustainable development, and there is also overwhelming evidence that gender equality boosts economic growth. Sweden has a feminist government that pursues a feminist foreign policy with a clear focus on women’s and girls’ rights, representation, and resources. A gender perspective is at the heart of all our work, including trade policy. Gender equality is not only good for society, but it’s also good for business. “

Hind Alowais, Vice President of International Participants Department at Expo 2020 Dubai said:  “The Women’s Pavilion by Expo 2020 Dubai in collaboration with Cartier is pleased to create a space to host conversations that matter with partners that matter.  The session on ‘Women and Career Progression’ highlighted the necessary strategies and policies, such as childcare facilities, flexible work schedules and quotas to promote more women in leadership positions. However, if the goal is true and irreversible gender equality, we need to move the wheels of culture, rewire our mindsets and address visible and invisible social norms and biases that hold women back.”

The event was held in partnership with the Embassies of Slovenia, Spain, Sweden, the Commissariat General of Italy for Expo 2020 Dubai and UN Women and hosted at the Women’s Pavilion by Expo 2020 Dubai in collaboration with Cartier.

Participants were also invited to a networking lunch hosted by H.E. Liselott Andersson, Ambassador of the Kingdom of Sweden to the UAE and H.E. Andrea Matteo Fontana, EU Ambassador to the UAE at the Swedish Pavilion, while also inaugurating the ‘Emirati Dads’ photo exhibition by the renowned Swedish photographer, Johan Bävman.