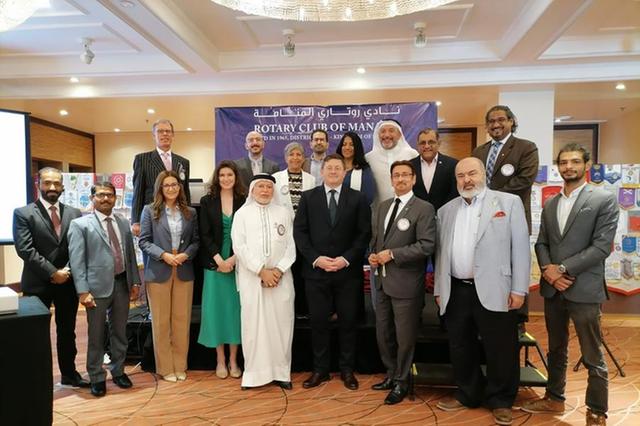 Stemming from its keenness to build communication bridges and its belief in the importance of boosting cooperation at all levels, the Rotary Club of Manama (RCM) has recently hosted His Excellency Mr. Roddy Drummond, the British Ambassador to the Kingdom of Bahrain, during its weekly meeting, which was recently held at the Gulf Hotel Bahrain.

The meeting, which was held in the presence of RCM President Osama Almoayed, Club members, and a number of guests and dignitaries, aimed to highlight bilateral relations and the importance of exchanging expertise between the two sides on all levels,.

During the meeting, President Osama welcomed HE the Ambassador, and reiterated the Club’s keenness to strengthen communication and cooperation between the two friendly countries in order to develop them in various fields in the interest of both countries and their peoples.

For his part, HE the Ambassador expressed appreciation to RCM for inviting him as a guest of honour and thanked the Club’s president and members for the warm welcome. At the same time, he highlighted the historical relations bonding the Kingdom of Bahrain and the United Kingdom, and the royal patronage it enjoys from the leaderships of both nations, wishing it continuous progress and prosperity.

Moreover, HE the Ambassador praised the active and noble role played by the Club in the Kingdom of Bahrain in terms of support and contribution to the less-fortunate segments of the society, including of widows, orphans and patients suffering from chronic diseases.

RCM forms part of Rotary International, which is the world’s first service club organisation and includes over 1.2 million members worldwide. Since its inception in 1965, RCM members have been actively participating and organising key community initiatives and projects, aiming to contribute towards societal needs and make a valuable addition to the development of the community.