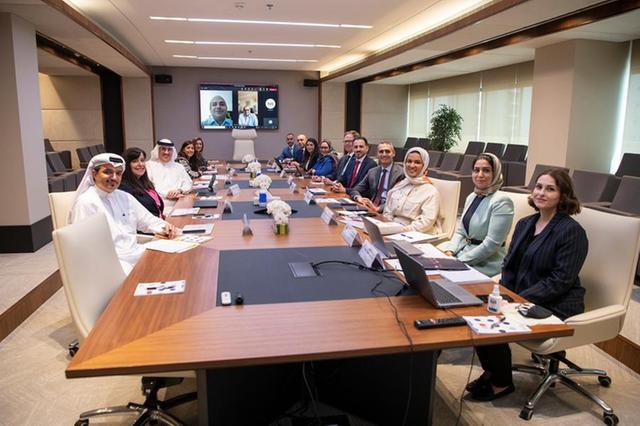 The Labour Fund (Tamkeen) held its first Board of Directors meeting for the year to discuss the updates on the implementation of its strategy and new programs during the first quarter of the year.

During the meeting, His Excellency Sh. Mohammed bin Isa Al Khalifa, Chairman of the Board of Directors said, “Tamkeen plays a pivotal role in supporting the economy, and we are very proud of Tamkeen’s achievements over the past fifteen years, especially around making Bahrainis the employees of choice and the private sector the engine of growth in the economy. We will continue our work in keeping pace with market changes to stimulate growth and increase productivity, driving greater economic impact through our new programs in line with the Kingdom’s National Economic Recovery Plan.”‎

H.E. added: “During the first quarter of the year, Tamkeen launched 16 programs which were developed with our local workforce and enterprises in mind, supporting their growth across the various stages of their professional careers and the lifecycles of their businesses. We are committed to driving growth and creating impact, and as such, we’ve introduced clear key performance indicators to measure the effectiveness of our support. Tamkeen will continue to support all sectors through training, employment, and investment, while focusing on incentivizing high-potential sectors that have the ability to grow our national economy”.

H.E. Husain Mohamed Rajab, Chief Executive of Tamkeen, said, “Tamkeen continues to implement strategic plans based on its core objective of empowering individuals and enterprises who are committed to development and growth. We opened applications to our new programs a month ago and have already noticed the increasing demand for the various support programs. Responses from our customers across different sectors have been positive, with many praising both the diversity and comprehensiveness of the support offered. We will continue to develop these programs in line with Bahrain’s economic priorities, ensuring that our customers are able to achieve their career and business objectives.”

During the meeting, the board members were given key highlights around Tamkeen’s new programs while also receiving updates on the key performance indicators (KPIs).

In the last two months, Tamkeen hosted around 60 virtual orientation sessions to introduce the public to the human capital and enterprise support programs. These sessions captured increased interest in Tamkeen’s strategic direction and new programs, in particular around digitalization, human capital development and employment, as well as increasing enterprise investment through expansion both locally and internationally.

Tamkeen recently announced a series of partnerships which aim to create training and employment opportunities for Bahrainis, including the partnership with the world’s leading technology academy General Assembly for the upskilling and reskilling of 1,200 Bahrainis in coding and other emerging Technology skills. Another strategic partnership was announced with Talabat for the establishment of one of the largest regional shared services centers, which will provide 1,000 jobs for Bahrainis, with Tamkeen’s support.

Also announced this quarter were the strategic partnership agreements with eight banks to provide new financing schemes for enterprises to grow and develop as part of Tamkeen’s new programs. These schemes provide enterprises with the necessary capital to fuel their expansion locally and internationally.

Additionally, Tamkeen launched its new electronic portal in conjunction with the new enterprise and individual support programs as part of Tamkeen’s efforts to improve the customer experience and update the application process, linking it more clearly to specific and transparent evaluation criteria based on key performance indicators.